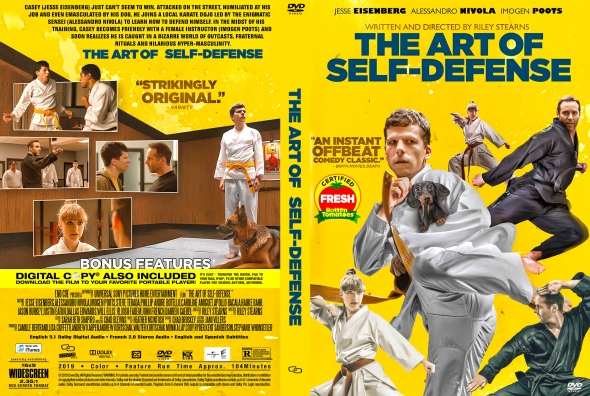 SZTUKA SAMOOBRONY / The Art of Self-Defense (2019)

«PLOT» Casey Davies is a mild-mannered, socially awkward accountant who does not seem to fit in with his work environment. While getting food for his pet Dachshund late one evening, Casey is confronted by a motorcycle gang, who ask if he owns a gun before brutally attacking him. While given time off from work to recuperate, he grows insecure and strongly considers purchasing a firearm for protection. But when he comes across a karate dojo, presided by „Sensei”, Casey takes advantage of a free trial class, opting to take further day classes rather than purchase a firearm. Casey meets Anna, a brown belt (and the only female student of the dojo) who teaches the children’s classes, and befriends Henry, a blue belt student. With time, Casey begins to perform well enough to catch the attention of his classmates and Sensei. He earns a promotion to a yellow belt, but both Anna and Henry are snubbed for their next ranks.

Sensei invites Casey to the dojo’s night classes, which are more extreme and brutal than the regular classes. Henry joins the class uninvited, but when he is called upon to help demonstrate, Sensei breaks his elbow at the joint and expels him from the dojo. During a sparring session, Anna brutally beats Thomas, the newly promoted black belt student, aiming to prove her skill to Sensei despite her gender, which Sensei claims disqualifies her from earning a black belt.

Casey is encouraged by Sensei to listen to heavy metal music (rather than his preferred „adult contemporary”) to become more masculine. After a two month absence from his accounting job, Casey returns as a more assertive employee. His alpha male attitude leads to him impressing his cocky co-workers and throat-punching his boss (although it is left ambiguous whether this latter act is a fantasy or not) and he gets terminated, but is then offered a temporary position by Sensei to be the dojo’s accountant. Casey reveals to Sensei that he is taking the classes in response to the traumatic experience of being attacked by the motorcycle gang. Days later, Sensei calls Casey telling him that he has spotted one of the gang members at a bar, encouraging him to attack the drunken suspect. Casey gravely injures him, but is surprised to find Sensei recording the confrontation, realizing that the suspect was innocent.

A distraught Casey returns home to find his dog unconscious. He is later pronounced dead at the hospital, due to trauma that resembles a punch from a foot — a technique Casey remembered learning during his first lesson. Casey returns to the dojo and accuses Sensei of killing his dog, which he denies. During the evening’s session, the entire class goes out to ride motorcycles — which look familiar to Casey — with orders to attack people who are by themselves. As partners, Anna and Casey target an undercover police officer. Anna is shot in the leg, but Casey kills the cop to Sensei’s approval. Casey takes Anna home and finds a German Shepherd at his house, given to him by Sensei. Casey returns to the dojo to investigate further.

In a restricted section of the dojo, Casey finds several disturbing things: A working crematorium; Henry’s corpse, hanging by his own blue belt; a hit-list; and a series of video tapes which confirm Sensei and some of his own classmates, including Anna and Thomas, as the motorcycle gang that attacked him. Casey also discovers that Anna prevented the gang from executing him during the assault. When Sensei returns in the morning, Casey challenges him to a fight to the death, as the dojo’s late grandmaster is known for. Suited up, the two bow, and Casey pulls out a gun from his gi and shoots Sensei in the head, killing him.

At the evening class, Casey tells the other students that he killed Sensei in a duel by punching his pointer finger through Sensei’s skull, having previously dipped his finger into the bullet wound as proof. Casey takes charge of the class and sics his new dog on Thomas, whom he discovers was responsible for killing his dachshund after finding a bite mark on his arm. Casey then promotes Anna to a full black belt and she becomes the new sensei, teaching her beliefs of compassionate combat over ruthless aggression. Casey is then promoted to teaching the children’s classes in her stead.