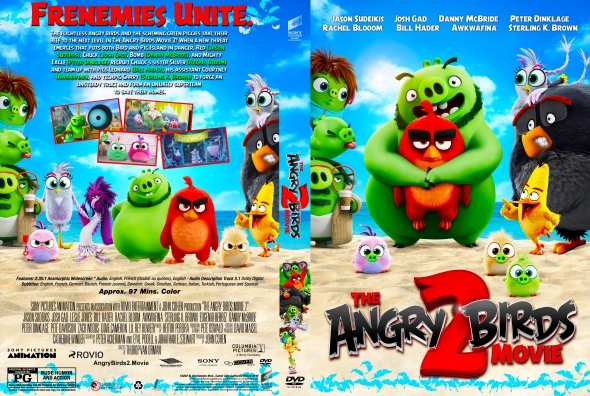 «PLOT» Three years after Red became the hero of Bird Island, he now runs a business protecting it smoothly with his two best friends Chuck and Bomb. They and the rest of the birds and pigs are in constant war against each other after Piggy Island, which was destroyed in a prior battle with the birds,[N 2] is rebuilt. Eventually, a giant ice ball from a nearby isle called Eagle Island hits the sea near Piggy Island, forcing the pigs to seek an emergency truce with the birds. Zeta, the leader of Eagle Island, is fed up with her frozen surroundings and wants to occupy the two islands by shooting ice balls from an advanced super-weapon to force their inhabitants to evacuate.

Meanwhile, three hatchlings, one of whom is Terrence and Matilda’s daughter Zoe, plan to reenact a battle between birds and pigs using Zoe’s three egg siblings at a beach, but the eggs drift out to sea by accident. They set sail to retrieve them, but once they catch up to them, a whale blows them into a cloud. They manage to get them down after inflating Zoe into the air only to misplace them again.

Chuck and Bomb force Red to join them in a speed dating activity, where Red meets Chuck’s sister Silver, an intelligent engineering student who deems him incompatible. Leonard, the King of Piggy Island, meets Red at his house and convinces him to build an alliance with the pigs. They recruit Bomb, Chuck, Mighty Eagle and Silver. A team meeting in Mighty Eagle’s cave is disrupted when an ice ball hits Eagle Mountain, destroying a portion of the mountain during the process.

As the team prepare to travel to Eagle Island by submarine, Red assures the civilians that they do not need to evacuate. Once there, Mighty Eagle confesses that Zeta is his ex-fiancée whom he abandoned due to cowardice, and he retreated to Bird Island. Red insists on fighting alone but Silver decides to follow him instead. They intrude the base from the mouth of the weapon only to be captured by the guards. The other team members disguise themselves as a Trojan Eagle and grab a key card to get into the base. Their disguise rips apart, but not before they drive the eagle guards into a breakdance battle, allowing them to escape.

Elsewhere, the three hatchlings finally find the eggs on a small island, guarded by a snake. They defeat it and plan to drift back to Bird Island, but arrive at Piggy Island by mistake and are greeted by three piglets whom they travel with by hot air balloon.

As Red and Silver are confined with their extremities frozen to inflatable recliners, Zeta tells them her plan to fire ice balls filled with lava at both islands. Red, who regrets not telling the islanders to evacuate, admits his selfish desire to be liked by everyone to Silver, who comforts him and frees them both using her long crest-braids, reuniting with the team. Red gives up leadership to Silver, who establishes a plan to destroy the weapon. Silver and Red put themselves in an ice ball and roll on a rail towards Zeta’s super-weapon, but the plan fails and the whole team are confronted by Zeta and her guards, giving her a chance to fire the weapon.

Suddenly, Mighty Eagle arrives to apologize to Zeta, but she quarrels with him, revealing his name as Ethan and that she raised a daughter, her servant Debbie, on her own. While Zeta is distracted, Silver tells Chuck to tie up the weapon using her super string, which catches and decelerates the lava balls after Zeta fires them. As the string breaks, the hatchlings and the piglets passing by Eagle Island help grasp it. The lava balls slide back into the weapon, destroying the whole base.

Everyone escapes, and Mighty Eagle protects Debbie from being crushed by a metal plate, redeeming himself to her and Zeta. Mighty Eagle and Zeta get married on Bird Island, with Red as the chief witness. Everyone praises Red for saving the islands, but he credits Silver and the team for doing so, unveiling a Mount Rushmore-style monument to them, and to his surprise, being even more beloved for his honesty and selflessness. The birds and the pigs have a huge party to celebrate while Red and Silver begin a romantic relationship and Chuck comes in to interrupt the two.

In a pre-credits scene, the hatchlings put the eggs back home, but three snakelets hatch instead. The injured mother snake comes and exchanges the babies with them, only for the three new hatchlings to drift out to sea again, waving goodbye to their shocked sister.