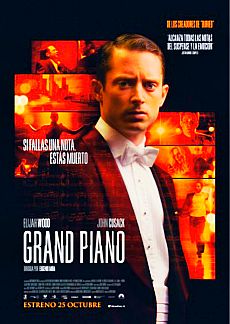 PLOT:  Tom Selznick was an up-and-coming concert pianist until he developed stage fright while attempting to play an unplayable piece „La Cinquette” that caused him to break down during a performance. Five years later, he is slated to reappear in public for a comeback performance in Chicago, dedicated to the memory of his late mentor, pianist/composer Patrick Godureaux. Godureaux posthumously acquired massive media coverage, due to the mysterious disappearance of his vast fortune. Selznick’s return to the stage has been due to the encouragement of his actress/singer wife, Emma.

Before the concert, a house usher runs over to Tom and hands him a folder of sheet music, which Tom greatly appreciates, as he almost walks onstage without it. He opens the folder, and to his disgust, finds the manuscript to „La Cinquette”. He crumples the music and throws it on the floor, and walks onstage. The concert begins with a three-movement piano concerto, and Tom plays brilliantly, but late in the first movement, he turns over his music sheet and sees a warning that says “Play one wrong note and you die.” Disbelieving and annoyed, he shrugs it off as a prank from one of the orchestra members. But then he turns to the next page, where another message states „Do you think I’m kidding? Look to your right…”. Looking to his right, he sees a laser dot from a sniper rifle aimed at his hand. Turning the page again, a third message says „Call for help and I’ll shoot you between the eyes”. Scared and confused, Tom leaves the stage and returns to his dressing room, shocking the audience, including Emma and her friends Wayne and Ashley. In his dressing room, Tom receives a text, which tells him to look in his backpack, where he finds an earpiece, so he can now hear and speak with his predator, Clem. The voice tells him that he is in control of the situation, and if Tom makes any attempts to call for help, or leave the hall, both he and Emma will be shot. Tom then walks back to the wings of the stage, where Clem demonstrates the power and accuracy of his high-tech silenced sniper rifle from his balcony box, as he shoots the carpet next to the piano, with no one in the audience or the orchestra noticing. He commands Tom to return to the stage to begin the second movement.

In a desperate attempt to subjugate the situation, Tom pulls out his phone and places it to his left, out of the sight of the shooter, and attempts to call Wayne in the audience, thereby distracting the performance. Wayne attempts to answer, much to Ashley’s dismay and embarrassment, and Wayne leaves the room, and tries to call Tom back. Through one sheet on the music, Tom is able to text Wayne to let him know Emma is in danger. Wayne receives the text and heads up to the box level to alert Emma, but the usher that handed Tom the music before the concert stops him. Wayne shows him the text, but as the usher (who is in cahoots with Clem) begins walking with him to Emma’s box, he pulls out a taser to stun Wayne, and then snaps his neck. Shortly thereafter, Ashley goes looking for him, and is ambushed and killed by the usher as well.

Clem then tells Tom to look above him to the rafters, and to his horror, he sees the dead body of Wayne hanging over a light fixture ramp, and the shooter cautions him not to lose his focus or he will die. Clem then commands Tom that instead of performing Beethoven’s „Tempest Sonata,” as the conductor originally announced, he must perform the piece that made him infamous five years earlier, La Cinquette. Clem taunts Tom about the last 4 bars of the piece, which, five years ago, caused him to freeze up onstage and break down, unable to complete the performance. Clem then reveals that he is a professional locksmith, and that shortly before Patrick Godureaux’s death, he was hired by Godureaux himself to design a highly complex lock inside the Bosendorfer piano Tom is currently playing. When the last 4 bars of La Cinquette are played flawlessly, the lock system is triggered, and will reveal a key to a safe which contains Godureaux’s fortune. He threatens Tom that the last 4 bars are crucial, and that Tom’s life depends on it.

During intermission, Tom runs backstage to try to find the crumpled manuscript, only to find the janitor burning it in the basement with the other trash. Tom feverishly listens to the piece in his dressing room and takes notes on a program to help him remember. Norman, the conductor, then announces Tom’s solo performance of the Beethoven sonata, but Tom interrupts him, and nervously but firmly announces he will perform La Cinquette, much to the delight of the audience. Clem warns Tom to pace himself, so as not to wear himself out. Tom plays the piece completely free of error, until he gets to the very last note of the piece: a solo D note towards the very low end of the keyboard, but he deliberately plays the wrong note to end the piece, infuriating Clem. Tom retorts back that the audience doesn’t know the difference, and receives a huge standing ovation, having finally conquered the piece. Clem shouts and swears at him, but Tom ignores him, and introduces Emma, and much to hers and the audience’s surprise, announces she will sing a song as an encore, with Norman accompanying. She reluctantly obliges, and bedazzles the audience, giving Tom time to find Clem.

He races upstairs and finds the dead body of the usher, and is then confronted by Clem, who chases him up to the light fixture rafters, directly above the piano onstage. The struggle between them causes a rivet to come loose, and to the horror of everyone in the concert hall, Tom and Clem come crashing down on the stage. Clem lands on the piano and is killed from the fall. Tom breaks his leg in the process, but survives. Emma rushes over to him and they embrace. Later, while waiting for their ambulance to leave, Tom sees the damaged piano being loaded into a shipping truck, and tells Emma, „I have to finish this.” Inside the truck, he plays the last 4 bars of La Cinquette, playing the correct note at the end this time, but nothing happens. Disappointed, Tom begins to walk away, until he hears the gears of the internal lock system begin to turn, and the sound of a metal key hitting the floor. He bends down to pick it up as the camera cuts to black.