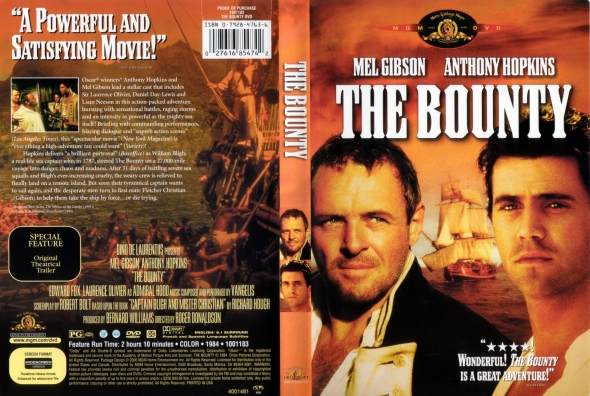 «PLOT» The film is set as flashbacks from the court martial at Greenwich of Commanding Lieutenant William Bligh (Anthony Hopkins) for the loss of HMS Bounty to mutineers led by his friend Fletcher Christian (Mel Gibson), during its expedition to Tahiti to gather breadfruit pods for transplantation in the Caribbean.

Bligh sets out from Great Britain in December 1787, electing to sail the Bounty west round the tip of South America in an attempt to use the expedition to fulfill an ambition to circumnavigate the globe. The attempt to round Cape Horn fails due to harsh weather, and the ship is obliged to take the longer eastern route. Finally arriving in Tahiti in October 1788, Bligh finds that due to the delays, the wind is against them for a quick return journey and they must stay on the island for four months longer than planned.

During their stay in Tahiti, ship discipline becomes problematic; many of the crew develop a taste for the easy pleasures that island life offers, making the relationship with their Captain tense. Bligh, at the same time, subjects the crew to pressure, eventually reaching breaking point. When the ship leaves Tahiti, Fletcher is forced to leave his native wife, Mauatua, behind.

The resumption of naval discipline on the return voyage turns Bligh into a tyrant not willing to tolerate any disobedience whatsoever, creating an atmosphere of tension and violence. Bligh insists that the ship is dirty and orders the crew to clean up several times a day. Many of the men, including Christian, are singled out for tongue-lashings by Bligh.

Playing on Christian’s resentment against Bligh’s treatment of both him and the men, the more militant members of the crew finally persuade Christian to take control of the ship. Bligh is roused from his bed and arrested, along with those considered loyal to him, and they are forced into a ship’s boat, minimally supplied, and cast adrift. The film follows both the efforts of Fletcher Christian to get his men beyond the reach of British punishment and the epic voyage of Bligh to get his loyalists safely to the Dutch East Indies in a longboat.

Bligh, through courage and excellent seamanship, and a return of his good character and leadership qualities, successfully manages to reach civilisation after a very harrowing journey without navigational charts nor firearms. One man, however, is killed by natives as the crew stop for supplies on a hostile island. Bligh is portrayed as a man who, on the one hand takes his sense of discipline and command too far, exceeding the limits of the ship’s company, but whose character ultimately successfully protects his loyal non-mutineers and guides their overcrowded boat to safety.

The mutineers sail back to Tahiti to collect their wives, girlfriends and native friends. King Tynah (Wi Kuki Kaa), however, is concerned that their presence on the island could incite King George to declare war against Tahiti and his people. Realising the folly of staying, they gather supplies and sail away to try to find a safe refuge. Christian pleads with Tynah to allow Mauatua to decide her own destiny. Tynah concedes, and Mauatua chooses the uncertainty of a life with Christian over remaining with her father.

The search for a safe haven is long and seemingly impossible, as they realise that any pursuing Royal Navy vessels will search all known islands and coastlines to find them. At this point, those who remained on board the Bounty are so frustrated that they are ready to rebel against Christian to turn the ship back towards Tahiti. After Christian forces the crew to continue on, they eventually find Pitcairn Island, a place which Christian realises is not marked on British maps of the region.

As the crew of the Bounty burn the ship to keep it from being found (as well as to motivate the crew to tough it out on the island), the judgment of Bligh’s court martial is read: Bligh is found not to have been responsible for the loss of the Bounty, and is commended for the voyage of the open boat. Meanwhile, Fletcher Christian and his men realise that they will never go back home to Britain.