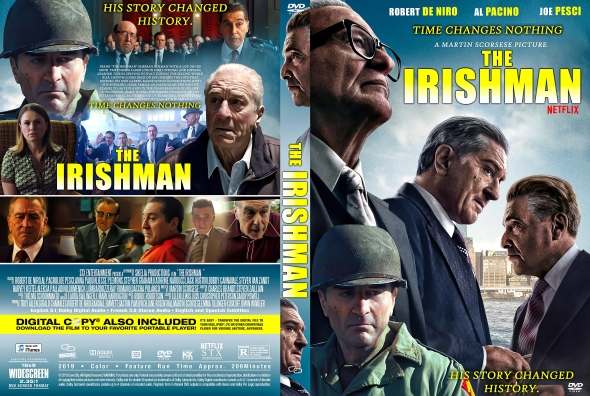 «PLOT» Sitting in a nursing home in his wheelchair, the aging Frank Sheeran, a World War II veteran, recounts his time as a mafia hitman.

In 1950s Pennsylvania, Sheeran drives meat packing delivery trucks and starts to sell some of the contents of his shipments to a local gangster. After getting accused by his company of theft, lawyer Bill Bufalino gets him off after Sheeran refuses to give the judge any names of who he was selling to. Bufalino introduces Sheeran to his cousin Russell, the head of the northeast Pennsylvania crime family. Sheeran begins to do jobs for Russell, including murders. Soon, Russell introduces Sheeran to Jimmy Hoffa, the head of the International Brotherhood of Teamsters, who has financial ties with the Bufalino crime family and is struggling to deal with fellow rising Teamster Anthony „Tony Pro” Provenzano, as well as mounting pressure from the federal government. Hoffa becomes close with Sheeran and his family, especially his daughter Peggy, and Sheeran becomes Hoffa’s main bodyguard while he is on the road.

After the 1960 election of John F. Kennedy, Russell is thrilled while Hoffa is livid. Kennedy’s brother Robert Kennedy, who was named Attorney General, forms a „Get Hoffa” squad in an effort to bring down Hoffa, who is eventually arrested in 1964 for jury tampering. While in prison, his replacement atop the Teamsters Frank Fitzsimmons begins overspending the groups’ funds and making loans out to the mafia. Hoffa’s relationship with Provenzano, who was himself arrested for extortion, also deteriorates beyond repair. Hoffa is eventually released via a Presidential pardon from Richard Nixon in 1971, although he is forbidden from taking part in any Teamsters activities until 1980.
Despite this, Hoffa begins his plan to retake his power atop the organized unions. Hoffa’s growing disrespect for other Teamster leaders and related crime family interests begins to worry Russell. During a testimonial dinner in Sheeran’s honor, Russell tells Sheeran to confront Hoffa and warn him that the heads of the crime families are not pleased with his behavior. Hoffa then discloses to Sheeran that he „knows things” that Bufalino and the other dons don’t know he knows, and further claims that he is untouchable because if anything ever happened to him, they would all end up in prison.

In 1975, while on their way to the wedding of Bill Bufalino’s daughter, Russell tells Sheeran that things have reached their breaking point with Hoffa, and his death has been sanctioned. The two drive to an airport where Sheeran gets on a flight to Detroit. Sheeran tells Hoffa he will be in town early in the day, but arrives late that afternoon. Hoffa, who had scheduled a meeting at a local diner with Provenzano and Anthony Giacalone, is surprised to see Sheeran arriving in a car with Hoffa’s foster son Chuckie O’Brien and Sal Briguglio, another gangster. They advise Hoffa that the meeting was moved to a house where Provenzano and Bufalino are waiting for them. Sheeran assures Hoffa that everything is fine and joins them in the car. Upon entering the house, Hoffa is surprised to realize that no one else is there and that he is being set up. Hoffa turns to caution Sheeran, who then shoots him twice at point-blank range before leaving the gun and the body at the entrance. After Sheeran leaves, two younger gangsters arrive to take Hoffa’s body to a crematorium to eliminate all traces of him.

Sheeran, Russell, Provenzano and others are eventually convicted on various charges unrelated to Hoffa’s murder as promised by Hoffa, and one by one they begin to die in prison. Sheeran is eventually released and placed in a retirement home. He tries to make peace with his alienated daughters, but Peggy never forgives him for Hoffa’s disappearance. Sheeran prepares for his eventual death as a lonely man.