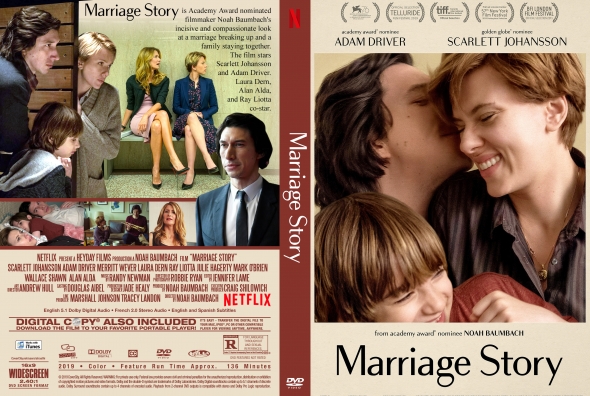 «PLOT» Charlie Barber (Adam Driver) is a successful theater director in New York City. His theater company is currently producing a play that stars his wife Nicole (Scarlett Johansson), a former teen film actress. The couple is experiencing marital troubles and sees a mediator, who suggests they each write down what they like about one another, but Nicole is too embarrassed to read hers aloud and they decide to forego the counseling.

Nicole is offered a starring role in a television pilot in Los Angeles, and she decides to leave the theater company and temporarily live with her mother in West Hollywood, taking the couple’s young son Henry with her. Charlie elects to remain in New York, as the play is in the process of moving to Broadway. When he flies out to Los Angeles to visit his family, he is served divorce papers. Despite the couple agreeing to split amicably and forego lawyers, Nicole hires family lawyer Nora Fanshaw (Laura Dern), who urges her to pressure Charlie into lawyering up himself. Charlie first meets with Jay Marotta (Ray Liotta), a brash and expensive lawyer who urges Charlie to fight dirty, but he decides to instead hire Bert Spitz (Alan Alda), a retired family lawyer who favors a more civil and conciliatory approach.

On Bert’s counsel, Charlie rents an apartment in Los Angeles to be closer to his family and strengthen his custody case. Charlie wishes to avoid going to court, so Bert arranges a meeting with Nora and Nicole. Nora argues that Charlie refused to respect Nicole’s wishes to move back to Los Angeles, and that Henry would prefer to stay with his mother than fly back and forth between coasts. In a private sidebar, Bert advises Charlie to drop his New York residency altogether, but a frustrated Charlie refuses and decides to fire him.

Charlie wins a MacArthur Fellowship grant and uses the first payout to hire Jay on retainer. The case moves to court, where Nora and Jay argue aggressively on behalf of their clients and attempt to paint the other party in a negative light. Nora highlights Charlie’s past infidelity and emotional distance, while Jay exaggerates Nicole’s drinking habits as alcoholism. Meanwhile, Charlie and Nicole remain friendly out of court and share time with Henry, who is increasingly annoyed with the back and forth.

Disillusioned with the legal process, the couple decides to meet in private away from the lawyers. A friendly discussion in Charlie’s apartment devolves into a bitter argument in which Nicole claims he doesn’t care about her and Charlie punches a wall and says he wishes she would die. He then breaks down in shame and apologizes; Nicole comforts him. Soon after, the couple agrees to relax their demands and reach an equal agreement to finalize the divorce, though Nora negotiates slightly better terms for Nicole.

One year later, Charlie’s play has a successful Broadway run while Nicole’s pilot (which she also directed) is nominated for several awards. Charlie informs Nicole that he’s taken a one-year UCLA residency and will be living in Los Angeles full-time to be closer to Henry. Later, he discovers Henry reading Nicole’s list of things she likes about Charlie that she’d been embarrassed to read. Henry asks Charlie to read it aloud to him, and Charlie does so, becoming emotional as Nicole watches from afar. That night, Nicole offers to let Charlie take Henry home even though it’s her night with him. As Charlie walks out to his car carrying a sleeping Henry, Nicole runs out, ties Charlie’s shoe, and says goodbye.