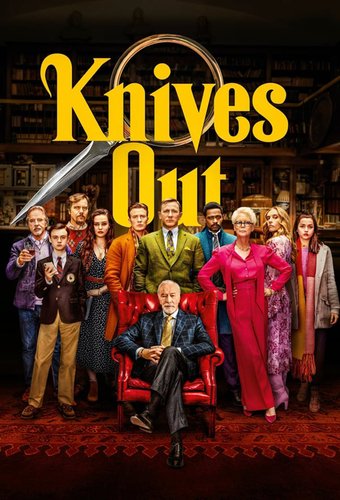 «PLOT» Wealthy crime novelist Harlan Thrombey invites his family to his mansion for his 85th birthday party. The next morning, Harlan’s housekeeper Fran finds him dead, apparently having slit his own throat. An anonymous figure hires private detective Benoit Blanc to investigate.

Blanc learns that Harlan had alienated many of the family: he had threatened to expose his son-in-law Richard for having an affair; cut off his daughter-in-law Joni’s allowance for stealing money meant for his granddaughter’s tuition; fired his youngest son Walt from his publishing company; and cut his lazy grandson Ransom out of his will.

Unknown to Blanc, after the party Harlan’s nurse Marta Cabrera accidentally injected Harlan with a fatal dose of morphine. Minutes from death, Harlan told Marta how to avoid suspicion, making it appear he was still alive after she had driven home, then he slit his own throat. Because Marta cannot lie without vomiting, she avoids answering their questions in a way that involves explicit mendacity, but Blanc asks her to assist in his investigation. As they search the property, Marta attempts to conceal evidence, but is only partially successful.

The family is shocked to hear from Harlan’s lawyer that Harlan left everything to Marta. They turn on her, but Ransom helps her escape. At a restaurant, Ransom tricks Marta into confessing to him, but offers to help her in exchange for his share of the inheritance. The other Thrombeys realize that, under the slayer rule, Marta will lose the inheritance if she killed Harlan, but Blanc tells them that they all are still suspects. They try to persuade Marta to renounce her inheritance.

Marta receives a blackmail note with a partial photocopy of Harlan’s toxicology report. She and Ransom drive to the medical examiner’s office, but it has been destroyed in a fire. Marta receives an email with a time and address to meet the blackmailer. When Blanc spots her and Ransom, Marta speeds away. The police catch them and arrest Ransom. Blanc explains to Marta that Harlan’s mother saw him climbing down from Harlan’s upstairs rooms on the night of his death. Marta lies that Ransom forced her to drive, and vomits without Blanc noticing.

Marta goes to the address in the email and discovers Fran drugged. She performs CPR and calls 911. Marta confesses everything to Blanc, but Ransom has already informed on her. At the house, Marta finds a copy of the full toxicology report hidden in Fran’s cannabis stash. Marta is about to confess to the family, but Blanc interrupts her when he spots something in the report. He brings Marta, Ransom and the police to a room to reveal his deductions.

After Ransom learned that Harlan was leaving everything to Marta (in an argument between Ransom and Harlan), he swapped the contents of Marta’s medication vials so she would kill Harlan with an overdose of morphine, making her ineligible to claim his inheritance according to the aforementioned slayer rule. However, Marta, an experienced nurse, administered the correct medicine without reading the labels. After the death was reported as suicide, Ransom anonymously hired Blanc to discover Marta’s guilt. Fran later saw Ransom swapping the vials back and sent him the blackmail note. Realizing that Marta had given Harlan the correct medication, Ransom passed on the blackmail note to Marta, removing the address and time. He destroyed the evidence of Marta’s innocence by burning down the medical examiner’s office and burning Fran’s copy of the toxicology report. He drugged Fran with morphine and emailed her location to Marta, planning to frame Marta for Fran’s murder.

Marta receives a call from the hospital and says that Fran is alive. Believing that Fran will implicate him, Ransom angrily confesses, vowing revenge. Marta vomits on Ransom; she lied that Fran had survived, and tricked Ransom into confessing. He attacks her with a knife, but discovers it is a retractable stage knife. As Ransom is taken into custody, Linda finds out about Richard’s affair through a letter Harlan had written for her in invisible ink. Marta watches the Thrombeys from the balcony holding Harlan’s mug which reads – “My house…” 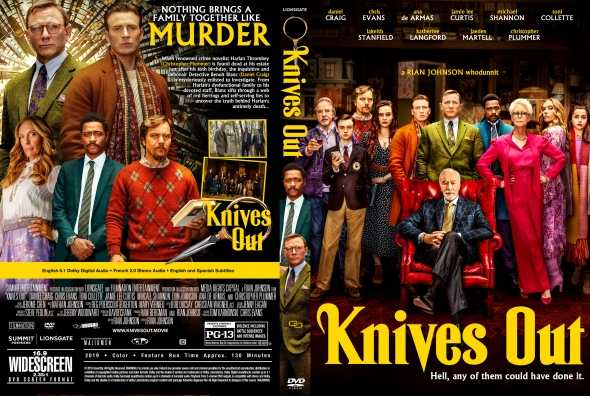