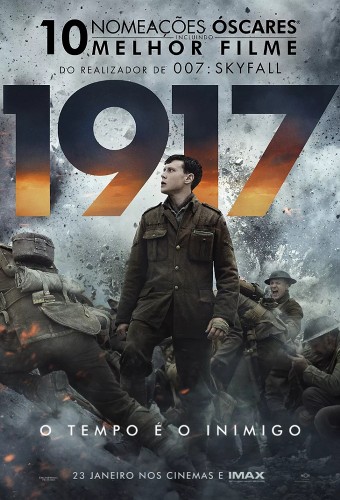 «PLOT» Two young British soldiers during the First World War are given an impossible mission: deliver a message deep in enemy territory that will stop 1,600 men, and one of the soldier’s brothers, from walking straight into a deadly trap.

At the height of the First World War during Spring 1917 in northern France, two young British soldiers, Schofield and Blake, are given a mission to hand-deliver a message to the 2nd Battalion of the Devonshire Regiment, calling off their planned attack on the German forces. The Germans have feigned retreat to the Hindenburg Line and are ready to ambush the battalion of 1,600 men, Blake’s brother among them.

Schofield and Blake cross no man’s land and reach the original German front, finding the trenches abandoned. The trenches turn out to be booby-trapped and the ensuing explosion almost kills Schofield; he survives thanks to Blake, who digs him out of the debris and leads him out of the collapsing bunkers.

The two arrive at an abandoned farmhouse, where they witness a dogfight nearby. A German plane plunges into the farm, and Schofield and Blake attempt to save the downed pilot. The pilot however stabs Blake, fatally wounding him. Schofield kills the pilot and comforts Blake as he expires, before proceeding with the mission alone. He is picked up by a passing British contingent and dropped off near the bombed-out village of Écoust-Saint-Mein.

At Écoust, Schofield is attacked by a German sniper. He tracks down and kills the sniper, but gets knocked out by a ricocheting bullet in the process. He regains consciousness at night and stumbles into the hiding place of a French woman and an infant, for whom he leaves milk from the farm and some of his own supplies. Continuing his mission, Schofield kills a German soldier and escapes across the river.

Schofield reaches the 2nd Battalion in the morning only to find that the attack has already begun, and that Blake’s brother is among the first wave to go over the top. He sprints across the battlefield to reach the commander of the battalion, Colonel Mackenzie, and the attack is called off. Schofield then locates Blake’s brother—who is unhurt—and delivers the news of Blake’s death.