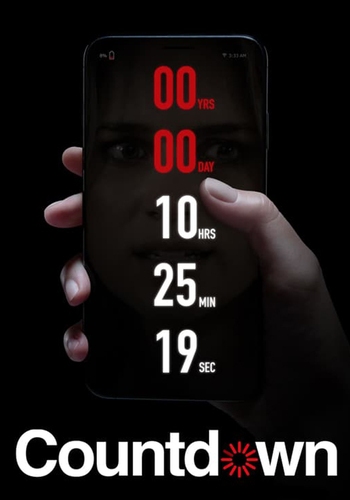 «PLOT» At a party, teenager Courtney is convinced by her friends to download Countdown, an app that seemingly predicts how long a user has left to live. Courtney is startled that it says she has only 3 hours to live. After avoiding getting into a car with her drunk boyfriend Evan, Courtney receives a notification stating that she has broken the „user agreement”. Returning home, she is attacked by an unseen entity and killed as her timer reaches zero. At the same time, Evan crashes and a tree branch goes right through where Courtney would have sat.

Quinn Harris, a nurse that works at the hospital where an injured Evan is admitted, suffers frequent sexual harassment by her boss, Dr. Sullivan, but fears speaking out as she has only just passed her exam to be an RN. Quinn stumbles across Evan in a closed-off wing of the hospital where he tells her about Courtney and his suspicions about the app. He also reveals that he downloaded it and it states that he will die at the time he is due to go into surgery. Quinn is dismissive of his claims but eventually downloads the app after her co-workers download it. She is horrified to learn that it says she has only three days left. Evan later skips his surgery and is informed that he has violated the user agreement of the app. He is confronted by a demonic version of Courtney and is killed.

Quinn visits her home to pick up an important document and encounters her younger sister Jordan who has a strained relationship with her following their mother’s death. The next day, Quinn learns of Evan’s death and procures his phone. She cancels a plan to go out with Jordan and their father before being informed that she has broken the user agreement. She is then harassed yet again by Sullivan before fleeing. Quinn researches the app, learning of Courtney’s death and that similar things have happened to other app users although they are widely regarded as fake but it’s real. She is startled by a vision of a dead Evan and flees her apartment. She is found the next day by Jordan and Jordan learns about the app which states Quinn only has one day left. Increasingly panicked, Quinn buys a new phone but discovers the Countdown app has installed itself on the new phone. After being attacked by a demonic figure, she encounters Matt, whose Countdown app states he will die a few hours before Quinn.

The pair head to the hospital to get help from the hospital’s priest only for Quinn to learn that Sullivan has tricked the staff into thinking that she sexually harassed him; as a result, Quinn is suspended. Matt is attacked by the entity taking the form of his younger brother who died of an illness years ago. The pair leave the hospital and begin to suspect that something in the user agreement may help them. It states the agreement is broken if the user tries to change their fate and they realize that they have canceled plans — Quinn’s trip with her family and Matt taking a train ride — that would result in their deaths. They consult a priest called Father John who states that the app’s code may help them. They hack into the code with the help of a phone salesman and learn that Jordan has downloaded the app and is due to die shortly before Quinn. With the help of Derek, a cellphone shop employee, they hack the app to add more years to all three of their life spans. However Quinn is attacked by the demon later that night and the countdowns revert to their original times.

After Jordan is attacked by the demon who takes the form of her mother, the trio consults Father John who identifies the demon name Ozhin and curse via the app code before theorizing that the curse can be broken if someone dies before their countdown ends or lives after. The countdown timer only needs to be beaten by one second, then they’ll win. They prepare a warding circle to protect them from the Ozhin’s attacks but Matt is lured out by the Ozhin taking the form of his brother. Matt ends up getting hit by a car and killed as his last breath expires exactly when the app said.

Jordan is also injured in the attack and Quinn takes her to the hospital where she learns that Sullivan also harasses other female staff members. Realizing that she could kill Sullivan and take the 57 years his Countdown app predicted for him, Quinn lures him into the closed-off wing and attacks him, but he is saved by the Ozhin who realizes what she is doing. The Ozhin hunts down Jordan as Quinn searches for Sullivan who escapes after Quinn is injured.

The Ozhin prepares to kill Jordan as her timer runs out but Quinn overdoses on drugs, sacrificing herself to destroying the Ozhin. Jordan notices that Quinn has written something on her arm where she drew herself a circle and the word “Narcan”. Jordan revives her by syringe with Naloxone and the duo succeed as the countdown timers for them both stop.

Later, Quinn, Jordan and their father visit their mother’s grave. As they leave, they hear news about Sullivan’s arrest after more nurses came forward and told similar stories of sexual assault. Quinn discovers an update of the app Countdown 2.0 has downloaded itself onto her phone.

In a mid-credit scene Derek is on a Tinder date. While his date goes to the bathroom Derek’s phone buzzes, he looks at it and the Countdown app says he has broken the user agreement. The lights in the restaurant go out before he is attacked (and presumably killed) by the unseen Demon. 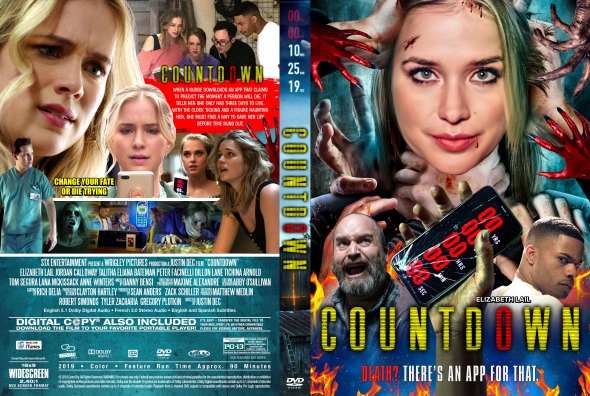