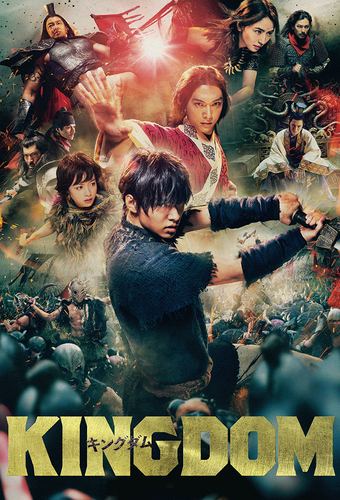 «PLOT» Orphaned by war, Xin is sold as a slave to a small village, where he befriends Piao, another slave. Growing up, Xin and Piao train together, dreaming of escaping their low statuses and eventually becoming great generals. One day, Chang Wen Jun visits their village in search of soldiers to aid the king Ying Zheng, but he will only accept Piao. A few days later, a mortally wounded Piao appears at Xin’s house, warning him that Ying Zheng’s brother, Cheng Jiao, has started a power struggle and urging him to go to a meet-up point marked on a map he gives him. Xin is forced to flee as his village is set on fire and the villagers are murdered by Cheng Jiao’s army.

At the meet-up point, Xin finds Ying Zheng, but they are ambushed by an assassin. Xin realizes that Piao was accepted into the army to serve as Ying Zheng’s body double due bearing a resemblance to him. After the assassin is killed, the two escape through a mountain path with help from Heliao Diao, a Mountain Tribe child who had accompanied the bandits who had previously ambushed Xin. As the three reach the bamboo forest, they are attacked by another assassin. Despite blaming Ying Zheng for Piao’s death, Xin defeats the assassin, but he is poisoned by one of his darts. The three take refuge at an ancient summer resort to help Xin recuperate, while Xin learns Piao had voluntarily sacrificed himself to serve Ying Zheng and about Ying Zheng’s bitter rivalry with Cheng Jiao.

Ying Zheng’s remaining army finally arrive at the summer resort, including Chang Wen Jun, who was previously assumed to have been killed by Wang Qi. The army is outnumbered by Cheng Jiao’s army of 80,000 soldiers, while Ying Zheng admits that Lü Buwei, the only person who can outmatch him, is also after the throne. Ying Zheng’s army resorts to seeking help from the Mountain Tribe, a former ally of the Qin royal family that had been betrayed centuries ago. On the way, they are captured by the Mountain Tribe and brought forth to the chieftain, Yang Duan He. Yang Duan He orders Xin to be beheaded to test Ying Zheng’s loyalty, but Xin’s dedication to Ying Zheng’s goal and mannerisms impress her, after which she announces that the Mountain Tribe will be affiliated with the Qin royalty again.

Ying Zheng’s army arrives at the royal palace disguised as part of the Mountain Tribe, under the pretense of helping Cheng Jiao fight against Lü Buwei. Jie Shi, Cheng Jiao’s advisor, allows only 50 people inside, and 10 of them to meet with Cheng Jiao. Inside, Ying Zheng initiates an attack, while Xin, Diao, and Bi use the underground passageway to reach the throne room and assassinate Cheng Jiao. Xin’s group is intercepted by Zuo Ci, Ying Zheng’s former general, who sends Lang Kai the Executioner after them. Xin kills Lang Kai with the help of the Mountain Tribe, and when they reach Cheng Jiao’s room, Zuo Ci defeats Xin’s group. Xin’s memory of Piao and belief in his own dreams pushes him to continue and he kills Zuo Ci. Cheng Jiao’s council flees, but Diao gouges out Jie Shi’s eye with a dart and is stabbed by him before he dies. While Diao is safe thanks to wearing armor, Cheng Jiao uses their distraction to escape.

In the courtyard, Cheng Jiao confronts Ying Zheng, but is quickly defeated. Ying Zheng spares him, but he beats him down to punish him for the suffering he caused. In the midst of this, Wang Qi and his army appear in the courtyard, where he inquires Ying Zheng what he will do as king, under the condition that he will behead him if he does not provide a satisfactory answer. Ying Zheng vows that he plans to unite China under the Warring States period, even using force as means to ensure that there would be peace in the future. Satisfied with his answer, Wang Qi allies with Ying Zheng and orders Cheng Jiao’s remaining army to retreat. With the battle won, Xin revels in the glory of making both his and Piao’s dreams come true.