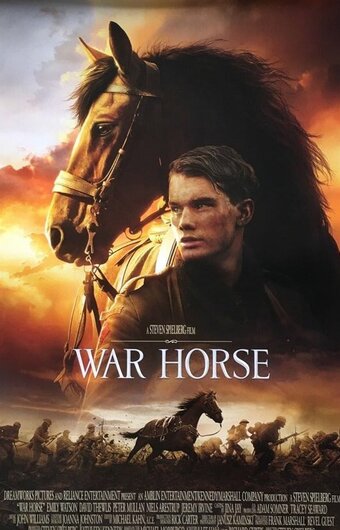 «PLOT» In 1912, a bay Thoroughbred is born in Devon, England. At auction, farmer Ted Narracott outbids his landlord Lyons for the colt, to the dismay of his wife Rose, because the family needs a working horse that can plough the field. Their son Albert, accompanied by his best friend Andrew, names the colt Joey, and teaches him to come when he imitates an owl’s call. The pair form a close bond. Against all odds, the horse and boy successfully plough a rocky field, saving the family’s farm.

Rose shows Albert his father’s medals from the Second Boer War, and gives him Ted’s regimental pennant, confiding in Albert that his father carries physical and mental scars from the war.

In 1914, as war with Germany is declared, a heavy downpour ruins the family’s crops, forcing Ted to sell Joey to the army. Albert is heartbroken and tries to stop the sale but is too late. Captain James Nicholls sees Albert’s attachment and promises to look after the steed. Albert tries to enlist but is too young, and before the company departs, he ties his father’s pennant to Joey’s bridle and promises the horse that he will find him.

Joey bonds with Topthorn, a black horse with whom he is trained for his military role. The horses are deployed to Flanders with a flying column under the command of Nicholls and Major Jamie Stewart. They lead a cavalry charge through a German encampment, but the unit is decimated by machine gun fire. Nicholls is killed along with almost all his fellow cavalrymen; the Germans capture the horses.

Gunther, a young German soldier, is assigned to the care of Joey and Topthorn. When his brother Michael is sent to the front line, Gunther takes the horses and the four of them desert. The German army soon tracks down the boys and they are shot for desertion; however, the Germans leave without noticing the horses. They are found by a French girl named Emilie the next morning. German soldiers arrive at her grandfather’s farm, but Emilie hides the horses in her bedroom. For her birthday, Emilie’s grandfather allows her to ride Joey; they run into the Germans, who confiscate the horses. Emilie’s grandfather keeps the pennant.

By 1918, Albert has enlisted and is fighting alongside Andrew in the Second Battle of the Somme. After a British charge into no man’s land, Albert and Andrew miraculously make it across to the German trench, where a gas bomb explodes.

The Germans use Joey and Topthorn to haul artillery, under the care of Private Henglemann. He tries to care for them as best as he can and eventually tries to free them, but Topthorn succumbs to exhaustion and dies. Joey escapes, narrowly evading an oncoming Mark IV tank, and gallops into no man’s land where he becomes entangled in barbed wire. Colin, a British soldier, makes his way to Joey under a white flag and tries to free him. Peter, a German soldier, comes over with wire cutters, and together they rescue Joey and remark on the remorseless war. To decide who should take the horse, they flip a coin; Colin wins and guides the injured Joey to the British trench.

Andrew is killed by the gas attack but Albert survives, temporarily blinded. While recuperating, he hears about the „miraculous horse” rescued from no-man’s land. Just as Joey is about to be put down by a doctor who deems Joey too injured to recover, he hears Albert’s owl call. Albert, his eyes still bandaged, is able to describe Joey in perfect detail, and the two are reunited. The doctor decides to nurse Joey back to health.

World War I ends, and Joey is ordered to be auctioned, just like all the other warhorses. Albert’s comrades raise a collection to bid for the horse as they fear he might be sold to a butcher. They seem to outbid the butcher but eventually the auction is won by Emilie’s grandfather, who tells Albert that Emilie has died and the horse is all he has left of her. However, after Albert pleads with him, the old man recognizes the strength of the soldier’s bond, and returns the pennant and Joey to Albert, as „Emilie would have wanted.”

Albert returns with Joey to his family’s farm, embracing his mother and returning the pennant to his father. The elder Narracott extends his hand to the boy, now a man and like him, a former soldier while Joey watches on, seemingly with pride thanks to everything he and Albert went through for 4 years.