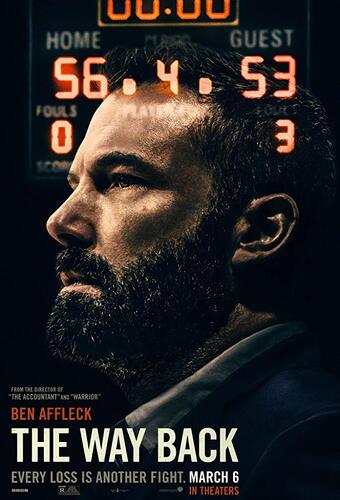 «PLOT» Jack Cunningham is an alcoholic construction worker who is separated from his wife, Angela. While at Thanksgiving dinner with his mother, his sister Beth, and her family, Beth reveals that friends, including Angela, have expressed concern about his drinking and isolation from friends and family. The next day, Jack receives a call from Father Devine at his Catholic high school Bishop Hayes, where he was a star basketball player and led the team to multiple championships. Father Devine asks him to step in as the school’s basketball coach, as the current coach has suffered a heart attack. Jack is initially reluctant, but accepts the job. Jack is introduced to assistant coach and algebra teacher Dan, as well as members of the team. Bishop Hayes has only won one game, and has not gone to the playoffs since Jack was a student. As a result, student interest in basketball has dropped greatly, leaving the team with just six varsity players. Among these players are Brandon, the team’s introverted point guard and most talented player, and Marcus, the team’s center, who aggravates his teammates and Jack with his attitude. The team faces Memorial, a larger school with a much more talented team, in Jack’s first game as coach. Trailing significantly and frustrated at a perceived lack of effort, Jack benches Marcus and demands the team play with more toughness. Never the less, Bishop Hayes loses badly. Dan begins to notice signs of Jack’s alcoholism, including an allusion to his drinking habits by Memorial’s coach and finding beer cans in Jack’s office.

After the game, Jack drives by Brandon walking alone and gives him a ride home. Brandon reveals that his mother is dead and his father cares for his younger brothers, leaving him unable to attend his games. Angela meets with Jack and reveals that she is seeing someone new. Jack begins to institute strategic changes to the team, adopting a full-court press defense and a focus on conditioning to make up for the team’s relative lack of size and talent. The team is initially annoyed by the stricter practices and Jack’s aggressive attitude, but soon grow to respect him. When Marcus arrives late for the next game, Jack kicks him off of the team. Jack’s changes result in a close game, and he draws up a play that allows Brandon to pass to a teammate for the game-winning shot. Jack encourages him to take the shot himself as the team’s best player, and to develop his leadership skills. He pushes Brandon to be more vocal on the court, eventually naming him team captain. Marcus comes to Jack’s house unannounced to ask to be allowed back on the team, with Jack eventually relenting. The team continues to succeed, and Jack develops a bond with his players. His drinking decreases, and he begins to spend more time with his family and friends. Jack and Angela attend a birthday party for David, the son of Jack and Angela’s friend Miguel. It is revealed that Jack and Angela had a son, Michael, who died from cancer. David and Michael were in the hospital together; David is now in remission. On a drive home, Jack reveals to Brandon that his father was neglectful, only paying attention to Jack when his basketball talent was discovered. As a result, Jack turned down a full athletic scholarship to the University of Kansas, and has not touched a basketball since.

With Bishop Hayes needing just one win to make the playoffs, they give up a 4th quarter lead to an inferior team. While protesting a call, Jack is ejected; Bishop Hayes loses the game. Their final game of the season is a rematch with Memorial. Jack visits Brandon’s father Russ at his work, informing him that Brandon has received attention from college recruiters. Russ, who was a college basketball player himself, has discouraged his son from using basketball as a ticket to a better life. At the game, Memorial jumps out to an early lead, but Bishop Hayes gradually mounts a comeback. On the final play, Jack draws up a play for Brandon to pass out for an open shot, but reconsiders, telling Brandon to take the shot himself. Brandon makes the shot, winning the game for Bishop Hayes. Later, Jack receives a call from Angela, telling him David is in the hospital. While visiting, Jack and Angela overhear a doctor informing David’s parents his cancer has returned. The sight of their grief disturbs Jack, who leaves the hospital and returns to his regular bar, where he begins drinking again.

The following morning, Jack arrives to practice late and still drunk, falsely blaming his absence on a power outage. Dan informs Father Devine, who fires Jack, telling him he is unable to trust him around the team and fears he has a serious problem. Jack resumes drinking heavily. One night, while driving drunk with a woman he meets at the bar, Jack rear-ends a boat hitched to a parked car. The woman flees, telling him to enter her house through the back. Jack accidentally enters the wrong house, where he is confronted by its occupants. Jack attempts to leave before the police arrive, but the confrontation becomes physical. He is pushed down the front steps of the house and is knocked unconscious in the street. He awakens in the hospital where he is met by Beth, who demands he get help for his alcoholism. Jack begins to attend therapy, and starts to open up about his son’s death. The Bishop Hayes team dedicates their first playoff game to Jack; Brandon sees that his father and brothers are in attendance. Meanwhile, at an outdoor court, Jack picks up a basketball, beginning to shoot.