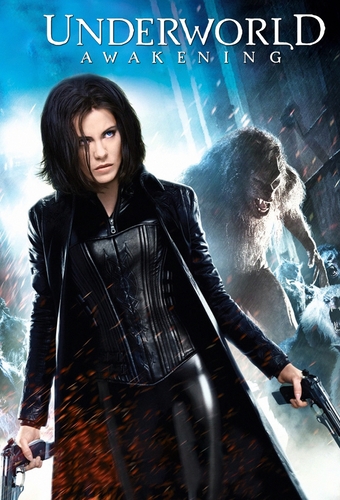 «PLOT» A few years after the events of the second film, both the government and the general public have become aware of the existence of the Vampires and Lycans. A program to study and potentially harness their powers soon escalates into an all-out genocide and shortly after the Purge begins, Selene and Michael are captured by humans. Due to her enhanced vampiric traits, Selene is imprisoned in cryogenic suspension.

After being frozen for twelve years, during which both species have been hunted to the brink of extinction, Selene manages to escape. She learns that another subject, whom she initially believes to be Michael, has also escaped. While making her way through the high-tech facility, Selene has visions from someone else’s point of view. Believing that Michael is mentally guiding her, she follows the visions, which lead her down a garbage chute into a labyrinthine series of basement tunnels. Here she encounters a young vampire named David, who has been tracking her. They quickly realize that the tunnels are infested with sick and weakened Lycans, who are hunting the subject Selene is connected with. Determined to reach Michael, Selene fights her way through the Lycan pack until she reaches the second escapee: not Michael, but a frightened and confused young girl.

Using David’s van, Selene, David and the girl make their way out of the facility, only to be attacked once again by a trio of Lycans. David stabs a Lycan while Selene shoots another; the third smashes its way into the rear of the vehicle, where it bites the girl’s shoulder. This triggers a partial transformation, revealing her hybrid traits, as she savagely rips the creature’s head in half. Selene realizes this is her and Michael’s daughter. The girl reveals that during her own escape from the facility, she found Selene’s cryogenic tank and deactivated it, which was what allowed Selene to escape. However, despite her hybrid nature it becomes apparent that her bite wound is not healing and she is rapidly growing weaker, resulting in David agreeing to take the pair to his coven.

After she reluctantly drinks some blood, her wound heals, but as they do not feel welcome in the coven, Selene prepares to leave. David tries to convince her to stay and help them start an offensive against the humans by training some Death Dealers, but before she makes up her mind, the coven comes under attack by Lycans. Selene joins the fight and kills many Lycans before being knocked unconscious by a huge „Super-Lycan” that heals instantly and is not affected by silver. When she awakens later she finds that Thomas, David’s father, has surrendered her daughter to the Lycans in return for them leaving. David has been mortally wounded in the battle, but Selene revives him with her blood. After leaving, Selene confronts a human detective named Sebastian, who is sympathetic to the vampires due to his now dead wife being a vampire. Sebastian confirms that the Lycans have been traced to Antigen, the corporation dedicated to killing off the immortal species, and which also runs the facility from which Selene has escaped.

Selene discovers that Antigen is actually run by Lycans, who have been posing as humans in order to trick the world’s governments into believing the Lycans are extinct. The director of Antigen, Dr. Jacob Lane, is trying to perfect the Lycan race and needs the DNA of Selene’s daughter to do so. The „Super-Lycan” Selene faced earlier is identified as Quint – Lane’s son and the prototype for Lycan modifications. Selene and Sebastian assault Antigen to stop Lane’s plan and save Selene’s daughter, who they begin calling „Eve”. Selene comes across Subject 0, whom she identifies as Michael, and attempts to free him by shooting his cryogenic tank. However, she is forced to leave the thawing Michael in order to stop the Lycans from escaping with Eve. David, who since being healed by her blood has inherited Selene’s immunity to sunlight, arrives and helps Sebastian kill several Lycan henchmen. After confronting Lane and Quint, Selene fights Quint. Once she tricks him into returning to his more vulnerable human form by hiding in a narrow tunnel, Selene kills him by implanting a silver grenade in his stomach, while Eve kills Lane by ripping out his throat. As the police arrive, Sebastian urges the vampires to flee and distracts the officers. Selene, Eve, and David return to Michael’s tank and find it empty with the ice shattered. Selene states that the world will be hunting Michael and the trio vow to find him first.