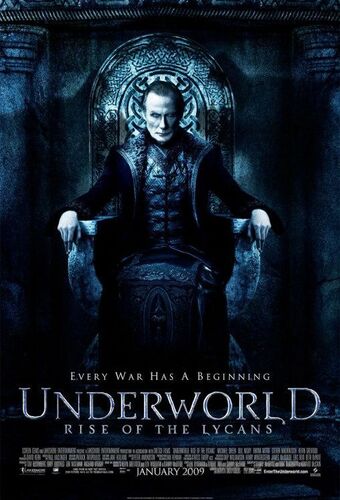 «PLOT» The film tells the story of Lucian, the first werewolf born capable of taking human form and the first to be called a Lycan. Viktor, a vampire elder, raises the child, envisioning a race of Lycan slaves guarding the coven’s fortress during the day and working as laborers for the vampires at night. The forests and the countryside are filled with savage werewolves born from William’s rampage, and human nobles have taken to begging Viktor for protection against the beasts: he grants it in exchange for tributes of silver, which enables him to keep his slaves under control. As Lucian grows up, he and Viktor’s daughter Sonja (Rhona Mitra) fall in love, and in their adult years they begin a secretive intimate relationship. Sonja is reckless and insubordinate, and one night Lucian escapes the shackles preventing him from turning werewolf and rescues Sonja from his werewolf brethren. Despite acknowledging that Lucian rescued his daughter, Viktor cannot forgive the escape and has Lucian whipped and imprisoned.

By trading her seat on the vampire council, Sonja enlists the help of Andreas Tanis in orchestrating Lucian’s release. Lucian, unable to flee alone, liberates the other Lycans as he escapes. Sonja remains, planning to meet Lucian in three days. As she prepares to leave she is visited by her father. Viktor asks if she assisted in Lucian’s escape: she denies it, but he discovers the truth by biting her neck and reading her memories through her blood. Discovering her relationship with Lucian, he imprisons her. Meanwhile, in the forest, Lucian recruits both human slaves and werewolves to build a force against the vampires. In the fortress, the vampire council and nobles demand that Viktor recapture Lucian, as his Lycans have been attacking human estates, freeing their slaves and offering them immortality as Lycans themselves. Viktor replies that he is confident Lucian will return as he has something Lucian wants: Sonja.

Lucian learns about Sonja’s imprisonment and eventually rescues her from her room but they are stopped from escaping by Viktor. Sonja, hoping to spare Lucian’s life, reveals to Viktor that she is pregnant with Lucian’s child. Disgusted, Viktor overpowers her and imprisons both her and Lucian. Sonja is unanimously sentenced to death by the council at a trial presided over by her father, and is executed by exposure to sunlight in Lucian’s presence. Viktor later visits her body and retrieves her pendant.

Lucian turns werewolf, but his attempt to escape the fortress is thwarted by the Death Dealers. He is able to communicate with and control the wild werewolves, however, and summons them to storm the fortress. A melee ensues in which vampire council members, their aides and lesser vampire nobles are killed. Realizing that Viktor intends to flee, Lucian pursues him and they fight. Lucian traps Viktor by exposing him to shafts of sunlight and then stabs him through the mouth with a sword and pushes his body down into a nearby body of water. With the battle over, Lucian’s deputy Raze declares that „it is finished”, but Lucian knows this victory is only the beginning of what will become a war between the races.

The film’s coda reveals Viktor, having survived his wound, on a vampire ship fleeing the fortress and being sealed in an elder hibernation chamber by Tanis. The opening scene of the first Underworld film is also shown, with the voice of vampire Kraven (Shane Brolly) revealing to Selene (Kate Beckinsale) that it was Viktor who had killed her family, not the Lycans, and that he had spared her life because she reminded him of his executed daughter Sonja; Selene, unaware of the truth, dismisses Kraven’s statement as „lies”.