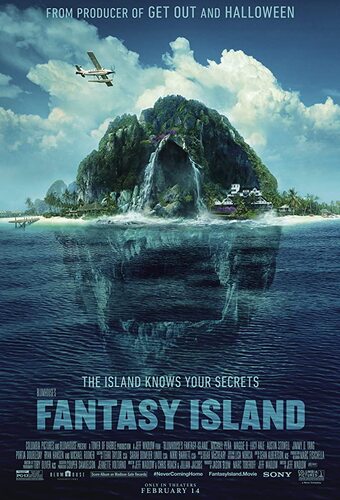 «PLOT» Businesswoman Gwen Olsen, former police officer Patrick Sullivan, step-brothers J. D. and Brax Weaver, and disturbed Melanie Cole win a contest to visit Fantasy Island, a tropical resort where fantasies apparently come true. Upon arrival, they meet the island’s „keeper”, Mr. Roarke, and are taken to their fantasies: J. D. and Brax enter a rave at a mansion; Patrick enlists in a war in honor of his late father; Melanie decides to take revenge on a bully; and Gwen accepts her boyfriend Alan’s marriage proposal she rejected many years ago. Patrick is captured by a group of American soldiers and discovers that their commander is his father on his last mission before dying, while Melanie enters an underground room where she tortures her bully, Sloane Maddison, by uploading an online video of her cheating on her husband.

However, another video reveals that Sloane was kidnapped and taken to the island to perform the fantasy against her will. Melanie saves her from a masked surgeon and they run away. As night falls, both are attacked again by the surgeon before he is killed by Damon, a private investigator living on the island. Damon takes them to a cave, where he explains that the fantasies are created by the spring water under the island’s „heart”: a glowing rock that shows a person’s deepest desires. After revealing that Roarke mixed the water with his guests' drinks, Damon explains that he came to the island to investigate until Roarke offered him a wish to see his deceased daughter. Unfortunately, his fantasy turned into a living nightmare that trapped him on the island. The trio collect some spring water and continue to the resort to find a phone.

Gwen wakes up to discover that she has a daughter with Alan. When she is reluctant to continue, Roarke appears and reveals that he has his own fantasy, which is to be with his deceased wife, and it will be fulfilled as long as he grants his guests their fantasies. Gwen manages to convince Roarke to change her fantasy by persuading him that he will continue to see his wife. However, Fantasy Island begins to turn the other fantasies into living nightmares as J. D. and Brax are attacked by a drug cartel associated with the mansion’s owner, while Gwen is taken to the night she accidentally caused a fire that killed her neighbor Nick Taylor. She tries to rescue Nick, but falls unconscious in the fire, only to be rescued by Roarke’s personal assistant, Julia. Gwen also realizes that all the other guests, except Melanie, were there that same night.

At the same time, Patrick attempts to leave the island with his father, but he is called to rescue some hostages, who turn out to be J. D. and Brax in the mansion. The soldiers kill the cartel, but they reanimate as zombies and murder J. D. and the rest of the soldiers. Patrick’s father sacrifices himself so that his son and Brax can escape back to the resort. Melanie and Sloane are ambushed by the zombified surgeon, until Damon leaps over a cliff with him, killing them both. Arriving at the resort, Sloane calls her husband and convinces him to call Damon’s military associates. The remaining survivors regroup at the resort, but are cornered by Roarke, who reveals that the guests are part of someone else’s fantasy in which they are all killed.

Realizing that everyone was involved in Nick’s death, the guests deduce that this is Roarke’s fantasy, believing that he and Julia are Nick’s parents. The guests escape to the dock to be rescued by a plane sent by Damon’s associates, only for it to be shot down by the cartel. The group runs to the cave to destroy the glowing rock with a grenade that Brax is carrying. While searching, the survivors are confronted by manifestations of their personal demons, but they regroup and find the rock. Suddenly, Melanie stabs and wounds Patrick before taking Sloane hostage. Melanie reveals that this is her true fantasy, having orchestrated everyone’s arrival to seek revenge on them for the death of Nick, with whom she was supposed to have a date on the night he died; it is also revealed that Julia is actually Roarke’s wife, reappearing with him as part of his fantasy.

Julia begins to die, but before disappearing she convinces Roarke to let her go and help his guests to escape from the island. Sloane takes a sip of the collected spring water before fantasizing Melanie’s death. This causes Melanie to be attacked by Nick’s zombified corpse, which drags her into the water. Before drowning, she detonates the grenade against the survivors, but Patrick sacrifices himself by falling on it to protect the others. The fantasy concludes, and Gwen, Sloane and Brax wake up at the resort, discovering that Patrick died from his injuries while a now-purified Roarke finally agrees to let them go.

As the survivors board a plane to leave the now-purified Fantasy Island, Brax wishes for J. D. to come back to life and go home, so he decides to stay with Roarke on the island for his fantasy to come true. After Gwen, Sloane, and J. D. depart on the plane, Roarke asks Brax to be his new personal assistant and to take on a nickname. Remembering a nickname that his brother gave him at school, Brax chooses to call himself Tattoo, initiating the 1977 television series' events.