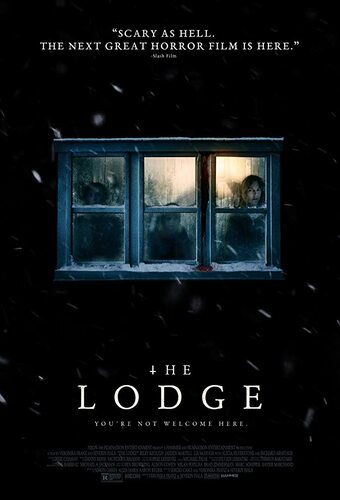 «PLOT» Richard Hall, an investigative writer, informs his wife, the devout Catholic Laura, that he wants a divorce following their extended separation so he can marry Grace, a young woman who was the sole survivor of her father’s fundamentalist Christian cult who committed a mass suicide; Richard and Grace met while he was writing a book on the cult. Laura subsequently commits suicide, which devastates the couple’s children, teenage Aidan and young Mia.

Six months later, Richard announces to his children at Thanksgiving that they will spend Christmas together with Grace at the family’s remote Massachusetts lodge to get to know each other. That night, Aidan and Mia access their father’s computer and uncover Grace’s past, including disturbing video footage of the cult, showing each of the deceased followers draped in purple silk with a strip of duct tape across their mouths reading „Sin”.

Several days before Christmas, the four arrive at the lodge, where the children act openly hostile toward Grace and refuse efforts to bond with her. When Richard departs back to the city for a work obligation, the children continue to act abrasively toward Grace, often completely ignoring her. Grace’s stress is compounded by the abundance of Catholic iconography in the cabin, which causes her to have nightmares about her father. Tensions rise after Grace catches Aidan watching her shower; after being reprimanded, Aidan appears to soften, and one night prepares her a cup of cocoa while she and Mia watch movies.

In the morning, Grace awakens to discover that her belongings—including her clothing, psychiatric medication, and dog—are missing. The food has also disappeared from the cabin, as well as Christmas decorations she put up the day before. The generator has gone out, leaving their cell phones dead. Grace suspects the children have pranked her, but finds their belongings are missing as well. She notices the clocks in the house have advanced to January 9th. A tearful Aidan tells Grace that he dreamed a gas heater in the living room malfunctioned and they all suffocated, and expresses his fear that they may in fact be dead.

Over the following several days, Grace—succumbing to anxiety, medication withdrawal, hunger, and cold—begins sleep walking, and is tormented by disturbing visions and dreams, including the recurrent voice of her father sermonizing. She attempts to walk to the nearest town, and discovers a cross-shaped cabin where she sees her father beckoning to her from inside; she eventually travels in a circle which takes her back to the lodge. Buried in the snow, she discovers a photo of Aidan and Mia in a memorial frame, and inside, finds the children frantically praying over a newspaper article detailing the deaths of all three from carbon monoxide poisoning on December 22nd. Aidan hysterically insists they are in purgatory, and appears to hang himself in the attic—which he survives—as proof that they are dead.

Grace suffers a nervous breakdown, which intensifies when she finds her dog frozen to death outside. She then enters a catatonic state on the porch. Worried she might die of exposure, the children finally admit to Grace that they have been gaslighting her the entire time, having drugged her, hidden their possessions in a crawlspace, and played recordings of her father’s sermons at night via a wireless speaker; Mia has been calling Richard daily so he will not suspect something is wrong. With their own phones dead at last, the children unsuccessfully attempt to start the generator and bring Grace her medication, but find her wholly convinced they are in purgatory and must do penance to ascend to heaven. That night, the children find Grace burning herself on the hearth. They barricade themselves in the attic, but are confronted by Grace in the morning, who insists they must „sacrifice something for the Lord.” Richard returns shortly after to discover an inconsolable Grace brandishing his pistol. In an attempt to prove her belief that they are in purgatory, she fires the gun at him, killing him. Aidan and Mia attempt to flee in the car, but get stuck in the snow.

Grace forces the children back into the lodge, where she seats them at the dinner table with their father’s corpse and sings „Nearer, My God, to Thee.” She then affixes pieces of duct tape reading „sin” to each of their mouths before contemplating the gun.