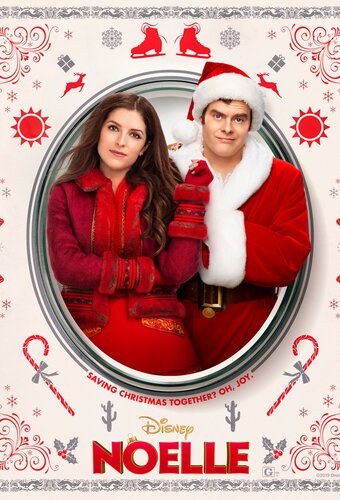 «PLOT» In the North Pole, preparations for the upcoming Christmas are quickly taking place. After the current Santa Claus’s untimely death five months prior, his son, Nick Kringle, is having difficulties trying to complete his training in order to become the next Santa. His younger sister, Noelle, who has been placed in charge of distributing and maintaining Christmas spirit, continues to support him, and even suggests taking the weekend off as to avoid the stress and relax before the big day. Complying, Nick takes off overnight with the reindeer, and doesn’t return following the weekend. When the reindeer return without Nick and Noelle admits to giving him controversial advice, the elves turn on her and forcibly appoint her cousin Gabriel, the Kringle’s tech support, to fill in as the new Santa.

Guilt-stricken and forlorn, Noelle deduces that Nick fled to Phoenix, Arizona, and takes off with the Sleigh and reindeer alongside her childhood nanny Polly, and set down into a mall. With the permission of manager Helen Rojas and the customer’s support and belief that it was a Christmas exhibit, Noelle sets out into the city to find Nick, leaving Polly to tend to the sleigh and reindeer. She meets and hires Jake Hapman, a private investigator as well as a single father who had recently been divorced, to track down Nick. Noelle also interacts with Jake’s enthusiastic son Alex and several other people, discovering that she can understand and communicate in other languages (including American Sign Language), as well as tell the naughty from the nice.

Jake tracks Nick down to a yoga studio, where Nick is enthusiastic to see Noelle yet cannot make himself return north and become Santa. After a heated argument, Noelle leaves the building. She returns to the mall, where her reindeer friend Snowcone arrives with a letter from Mrs. Claus informing her about the situation back home and ordering her to find and bring Nick back home. During Noelle’s time away, Gabriel had used an algorithm to determine that there were only 2,837 „nice” children in the world, much to the horror of the elves and Mrs. Claus.

With help from Snowcone, Noelle tracks down Nick to a yoga retreat at the Desert Botanical Garden, and convinces him to return. After a falling out with Jake at the mall over identity, and an argument between Nick and the mall Santa, Noelle accidentally injures a police officer attempting to break up the argument, is injured, and later hospitalized for psychological evaluation.

After a visit from Polly, who reveals her identity as an elf, Jake removes Noelle from the hospital and she makes her way back to the North Pole with Nick, Polly, and the reindeer before Christmas Eve. Back home, after a meeting with the elders, Nick nominates Noelle as the next Santa, which stirs up controversy throughout the town but unanimously gains agreement from the elders as she naturally has the skills and there is no rule against a female Santa. Noelle successfully delivers the presents across the world, as well as dropping Jake off at his ex-wife’s house to spend time with Alex. The next morning, Gabe happily returns to tech support and Nick establishes a yoga studio in the North Pole. Noelle admits to the audience that she is proud to continue her father’s legacy for being the 24th generational Santa, and that Christmas will go on.