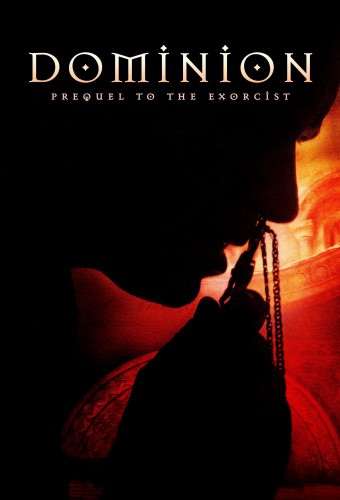 «PLOT»In 1944, a Nazi SS lieutenant named Kessel forces the parish priest of a small village in occupied Holland, Father Lankester Merrin (Stellan Skarsgård), to participate in arbitrary executions in retaliation for the murder of a German trooper in exchange for sparing the village.

In 1947, Merrin, whose faith was shattered by the incident, is an archaeologist in Derati, a remote area in the Turkana region of British Kenya excavating a Byzantine church built around the 5th century—long before Christianity had reached that region of Africa. He meets up with Father Francis (Gabriel Mann), a Maryknoll missionary appointed to ensure the church is not desecrated, and Major Granville (Julian Wadham), the British military officer overseeing the dig.

Making their way to Derati with Chuma (Andrew French), Merrin’s translator and guide, Merrin introduces Francis to Rachel (Clara Bellar), a doctor who spent time in a concentration camp and is haunted by her experiences there, and Emekwi (Eddie Osei), an enthusiastic convert who provides accommodation for the two men. Merrin takes Francis on a tour of the dig site. Astonishingly, the church is in perfect condition, as though it had been deliberately buried immediately after its construction was completed.

On the site, Merrin meets a shy, physically-deformed young boy named Cheche (Billy Crawford), shunned and mistreated by the locals for fear that he is cursed. Although dissuaded by Chuma, Merrin attempts to make contact with Cheche, finally managing to bring the boy to Rachel for medical treatment.

Once the door is uncovered, Merrin, Francis, and Chuma go inside the church. Francis notices that this particular church is built in such a way as to restrain something beneath it. A hidden passageway leads them to a crypt containing a demonic idol—an ancient sanctuary where human sacrifice was performed. Merrin deduces that the church was built, not as a place of worship, but to seal this underground temple. On their way back, they find corpses of hyenas (who have appeared out of season) being eaten by a herd of cattle. The Turkana elders, thinking the church is evil, demand Merrin stop digging.

Francis contacts Granville to send a detachment to guard the dig from potential robbers, despite Merrin’s objections. Two British soldiers attempting to loot some precious stones from the church are then found dead the next day (one was beheaded; the other crucified to the altar head downward). Despite the Christian symbolism used in the murders and the testimony of Jomo (Israel Aduramo), a Turkana warrior who had long been keeping a wary eye on the site, that the two men were affected by a strange madness that caused them to kill each other, Granville, blaming the Turkana, goes to town in a fit of rage demanding the purported culprits be given up, shooting a young woman in cold blood when the locals protest. The town is then placed under military surveillance.

Determined to stop the ‚Christian evil’ from spreading, Jomo breaks into the mission school and slaughters Francis’ students—Emekwi’s two sons—before he is shot on the spot by British soldiers. Emekwi bitterly questions if this is how God rewards those who keep faith with him.

Francis has a disturbing realization that Cheche’s unusual recovery is not caused by God, as he had thought. Fearing for Cheche’s soul, he considers baptising him; the boy accepts on the condition it be held at the church. Meanwhile, a guilt-ridden and despairing Granville commits suicide by shooting himself in the mouth.

The Turkana elders (via Chuma) demand that the church be reburied and Francis—who they hold responsible for the spread of the ‚Christian evil’ and the arrival of the British troops—and Cheche be handed over to them to be killed; when their demands are turned down, war between the two sides become inevitable.

Francis, assisted by Rachel, begins to baptise Cheche at the church; as they do so, however, the demon controlling Cheche assaults them. Realising an exorcism is in order, Francis leaves quickly to fetch his copy of the Roman Ritual. The demon removes Cheche’s deformities and transforms him into a hairless, androgynous ‚perfect’ being; an earthquake erupts and seals off the entrance to the church. The Sergeant-Major (Ralph Brown), Granville’s second-in-command who had assumed control of the troops after the latter’s death, postpones Merrin’s requests to clear the entrance for daybreak.

The next morning, Merrin and the British find Francis tied to a tree naked, shot with arrows, but still alive. Francis is taken to the hospital to be looked after by Emekwi’s wife. After recovering, Francis reveals to Merrin that Cheche is possessed and begs him to perform an exorcism. Another earthquake shifts the rocks, unblocking the church entrance just enough to allow Merrin to go inside. At the underground temple, Merrin finds Rachel—who runs away under a trance—and the possessed Cheche. Merrin rushes back to the infirmary to wear Francis’ vestments, and goes back to the church to begin the exorcism. The demon offers Merrin a chance to rewrite his past, at which Merrin (in a hallucination) finds himself back in 1944 Holland: when he refuses to cooperate, Kessel instead has Merrin and all the villagers killed for his defiance.

When Merrin comes back to his senses, the demon mocks the futility of his attempt to change what happened. As Merrin recommences the exorcism, a supernatural aurora appears in the sky, the entranced Rachel attempts to kill herself, Emekwi violently beats his wife and the Turkana charge to battle. Despite the evil spirit’s resistance, the exorcism succeeds. Cheche regresses to his former condition as the demon leaves his body and enters that of a hyena.

With the demon driven out of Derati, life returns to normal and the British detachment leave. One of the local elders, however, warns that the demon will pursue Merrin. Bidding farewell to Rachel and Cheche, now serving as Rachel’s assistant at the infirmary, Merrin, who has regained his faith and is an active priest once more, leaves for Rome.