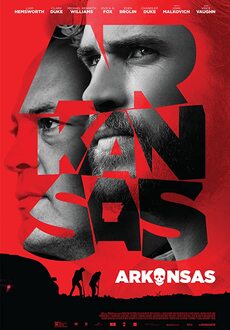 «PLOT» Kyle Ribb is a drug dealer working for a man only known as Frog. He is „promoted” to Arkansas to move wholesale with a talkative and overconfident Swin Horn. While trucking product to Corpus Christi, the rope holding down the flatbed tarp breaks, and they are forced to stop. They meet a ranger named Bright who offers to help. When Kyle points a gun at him, the ranger reveals that he also works for Frog and that both Kyle and Swin are going to work under him at the park. They are assigned trailers to live in and are ordered to keep a low profile.

They begin work trafficking drugs to different states in the South. Swin meets a woman, Johnna, and starts dating her. Johnna takes Swin along to sell off her obsolete gym equipment, which the pawnshop owner refuses to buy. At night, while it rains, Kyle, Swin, and Bright drink together as their new orders come. The orders came from a woman called Her who lives across the lake in a houseboat. They are to go to Castor in Louisiana now to hand-deliver the product and also collect the payment. After following them back to the park, Nick, the grandson of the buyer, tortures Bright for the money, and they both end up killing each other. When they discover their bodies, Kyle drives over to Castor, kills the buyer, and buries Bright in the park. Swin wants to run while Kyle explains that running will only end up with them being dead. They unsuccessfully try to contact Colin, a middleman, to pass up the word.

Back in 1985, Frog, who is revealed to be the pawnshop owner from the park, sells bootlegged tapes from his pawnshop in West Memphis before beginning moving drugs. After killing the middleman, he escapes out of West Memphis to Pine Bluff and starts working for Almond who gives him weekly supplies to sell. One day, they go and see the middleman. Dissatisfied with his payout, Frog sets Almond up and gets him arrested. He explains to him that he is taking over, and he’s learned a lot from him and amicably asks for the middleman. After some time when the middleman wants out of the game, he sells his wholesaler to Frog.

Back at the park in present time, Kyle and Swin find a stash of cash in Bright’s house. They decide to leave it be. They receive an order from Her just like last time. They are paid a visit by Barry, son of a friend of Bright, who is there to inform Bright of his friend’s passing. He is sent back on his way by Kyle. They both decide to buy guns since their safety is in jeopardy. However, unbeknownst to them, the pawnshop owner is Frog, and he doesn’t sell guns.

Back at the park, while Swin is out jogging, Johnna reveals to Kyle that she is pregnant and that she deduces the two are in trouble in some shady business from all the secrecy. Kyle tells her everything. The next morning, Barry returns, asking for Bright. Kyle kills him and buries his body as well.

Back in the past, after buying the wholesaler from the middleman, Frog recruits twins Tim and Thomas and recites the same rules as Bright gave Kyle and Swin. Many years later, Frog visits the twins and gives off the business to them, telling them that they are ready, and he wants to make way for them. He will retire, open up a pawnshop, and keep earning a small percentage of the business.

In the present time, Kyle and Swin are running the park and waiting for their next orders. Frog is determined to make them pay, irrespective of whether they killed Bright or are just covering up mistakes. He gives Her one last package for them to deliver in Hot Springs. At the delivery, they are met by the twins. Thomas takes Swin to execute him while Tim plans on interrogating Kyle about the whereabouts of the stash from Bright’s house and Johnna. They get into a struggle and Kyle injures Tim. Kyle then escapes back to the park to get the money and gives it to Johnna. He tells her that Swin wasn’t scared and did not betray him before he died. He gives her the address of Swin’s family as they part ways.

Frog advises Thomas not to think of revenge and turn back to business as a way of getting past it. Thomas, in a frenzy, empties out Frog’s joint accounts and then goes hunting for Kyle, after putting Tim out of his misery. Frog buries Tim in the park and closes his pawnshop, ready to get back in the business. He gets a contact for an order from an old acquaintance. He is met with an injured Kyle, who shoots Frog and takes the contact from him. Kyle says there is no resigning as a drug dealer.