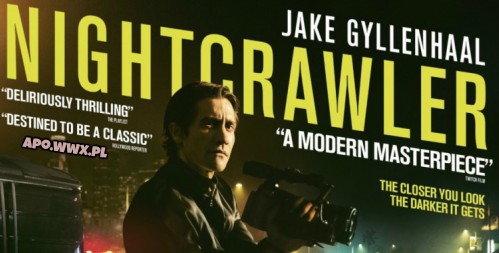 PLOT –  Caught stealing from a Los Angeles construction site, Louis Bloom is confronted by a security guard. He attacks the guard, steals his watch, and leaves with the stolen material. After selling the material at a scrap yard, Bloom asks for a job there but is rejected.

Driving home, Bloom sees a car crash and pulls over. Stringers—freelance cameramen—arrive and shoot the crash. Inspired, Bloom steals a bicycle and trades it for a camcorderand a radio scanner. That night, Bloom shoots the aftermath of a carjacking. When he moves closer to get a better shot, he and rival stringer Joe Loder are kicked off the crime scene. Bloom eavesdrops on his rival’s phone conversation about selling his footage to a news station.

Bloom goes to the same station to sell his footage. He meets the morning news director of the station, Nina Romina. She purchases his footage and tells him of their specific interest in footage of violent incidents with „preferably well-off and white” victims, but only when perpetrated by „the poor or a minority”. Bloom hires an assistant, Rick, a young man desperate for money. To give his footage more impact, Bloom begins tampering with crime scenes and in one case moves a body. As Bloom’s work gains traction, he buys better equipment and a muscle car.

Bloom takes Nina to dinner and threatens to end his business with her unless she has sex with him. He points out that her job depends on his footage, especially since sweeps weekis starting. The next day, he turns down a business offer from Loder to man a second van. The second vehicle will double Loder’s coverage, enabling him to get to stories faster. Later that night, Loder beats Bloom to an important plane crash story. Nina explodes in anger at Bloom, demanding he get better footage and keep his end of their bargain. Bloom sabotages Loder’s van, causing it to crash. Loder is severely injured and Bloom coldly films the aftermath.

Bloom and Rick arrive at the site of a home invasion in an affluent neighborhood before the police. Bloom records gunmen leaving in their SUV and the murder victims in the house. The news staff argue over the ethics of the footage but Nina is eager to break the story. In exchange, Bloom demands public credit, more money, and that Nina be more cooperative when they’re alone together in her apartment.

The next day, the police visit Bloom and ask him questions about his whereabouts and his knowledge of the robbery. He gives them edited footage, cutting out the parts with the gunmen. At night, he picks up Rick and tracks down the gunmen using their license plate. He plans to follow them to a more affluent area, then call the police and record the resulting confrontation. Terrified, Rick demands half the money Bloom stands to make, threatening to tell the police about Bloom’s crimes. Bloom appears upset, but agrees.

When the gunmen stop at a restaurant, Bloom phones the police and sets up the positions for filming. The police arrive and a shootout ensues. One suspect is killed while the other escapes in his SUV. The police give chase, with Bloom and Rick tailing and recording. After the gunman’s SUV crashes, Bloom urges Rick to film the gunman, claiming he is dead. The gunman, who was only wounded, fatally shoots Rick. The gunman tries to escape but is shot by police. Bloom films Rick dying, saying that he cannot work with a partner he doesn’t trust.

Nina is awed by the shootout footage and expresses her devotion to Bloom. The news team discovers that the „home invasion” was actually a drug deal gone wrong; Nina omits this information to maximize the story’s impact. The police try to confiscate all copies of the footage for evidence but Nina defends her right to air it.

Interrogated by police detective Frontieri, Bloom fabricates a story about the men in the SUV following him. Frontieri suspects he is lying, but cannot prove it. Bloom hires a team of interns and purchases new vans to expand his business.