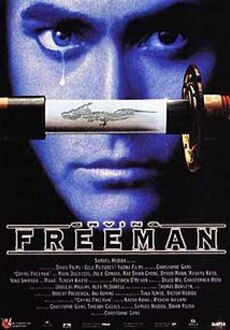 «PLOT» While painting the landscape on a hill in San Francisco, a young woman named Emu O’Hara witnesses the murder of a Japanese Yakuza member. She notices that while the assassin stands emotionless in front of her, his eyes begin to shed tears. The assassin introduces himself to Emu as „Yo”.

Days later, after Emu returns to her home in Vancouver, British Columbia, Shido Shimazaki makes his appearance at the local police precinct, announcing a war between his clan, the Hakushin Society, and the „Sons of the Dragons” – a Chinese Triad that ordered the assassination of Shimazaki’s son in San Francisco. Interpol detective Netah explains that the Sons of the Dragons are descendants of 108 Buddhist monks who rebelled against the Manchu reign in China centuries ago, and that the „Freeman” is their bringer of death. Shimazaki then tells everyone that Emu is the Freeman’s next target, as she was the only witness to his son’s assassination, and the assassin’s code is that a person who is given Freeman’s name becomes his next kill. However, shortly after their meeting is adjourned, Shimazaki and his bodyguards are ambushed outside the precinct by a masked Freeman and his assistant Koh. After dispatching the bodyguards and disabling the nearby police officers, Freeman successfully kills Shimazaki before running off. During his escape, he passes by Emu, who recognizes his eyes through his mask. As Freeman and Koh flee the scene, Emu utters Yo’s name to the surprise of Detective Forge, who is assigned to protect her.

Later that night, Emu is interrogated by Netah and Forge over Freeman’s identity. Due to a lack of evidence, she is shortly released and escorted back to her mansion. As Netah scouts the mansion’s perimeters, he discovers that Forge is knocked unconscious and he encounters Ryuji and Kimie Hanada, who are out to claim the Freeman’s head and take over the Hakushin Society. Inside the mansion, Emu discovers that Yo is in her room and begins to accept her fate. However, instead of killing her, Yo makes love to her before members of Ryuji and his gang break in. Yo kills the thugs and wounds Ryuji, but Emu is shot in the process. Against his own code, Yo brings Emu to the nearest hospital. After she recovers, Emu leaves the hospital, tailed by Netah and Forge; however, their car is rammed by a tractor-trailer driven by a Yakuza, and Forge is killed in the ensuing crash and explosion.

Emu travels to Japan and reunites with Yo, who tells her about his origins. Years ago, he was Yo Hinomura, a renowned pottery sculptor who stumbled upon a roll of negatives during his exhibit in New York City. Yo developed the photos in his hotel bathroom, revealing the torture and execution of a man wearing dragon tattoos similar to what he would eventually wear. Before leaving his hotel, he was drugged and abducted by the Sons of the Dragons, who implanted subliminal messages into his mind using acupuncture techniques. During his first mission, where he killed Mafia boss Antonio Rossi, he began to shed tears; hence his name Crying Freeman.

Yo is notified by Koh that Ryuji’s gang have attacked a soya factory in Shanghai that was protected by the Sons of the Dragons. As retribution, Yo and Koh travel to Shimazaki’s funeral outside Tokyo to kill Ryuji and wipe out the clan. During the funeral, while having sex inside a closet, Kimie reveals to Netah that the Shimazakis were set up by the Hanadas to be assassinated so they could take over the clan. Yo and Koh wipe out the clan, but as Koh prepares to kill Yo for treason, Ryuji guns him down before the entire complex blows up and kills him.

Yo returns to his home, where he prepares the area to self-destruct and arms himself to battle Netah and Kimie, along with her henchmen. Despite being wounded by Netah, Yo kills the henchmen and defeats Netah and Kimie – the latter by stabbing her near the heart. Kimie gives Yo her word of honor that in exchange for saving her life, he and Emu won’t be pursued. While Yo and Emu leave the premises, Netah prepares to shoot them from behind, only to be killed by Kimie. Yo and Emu are last seen riding a speedboat into the sunset.