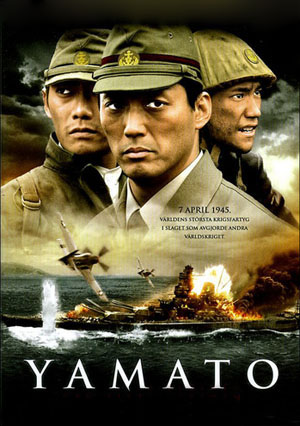 PLOT:  The film begins with footage from Asahi Shimbun's special expedition to the Yamato wreckage in 1999, then to a woman, Makiko Uchida, visiting the Yamato Museum in Kure, Hiroshima on 6 April 2005. She is looking for a boat to take her to the site where the Yamato sank, to honor the crew on the 60th anniversary of the ship’s last battle. Katsumi Kamio, a survivor who is now a fisherman, agrees to take her after he discovers she was an adopted daughter of Petty Officer First Class Mamoru Uchida, a crewman and close friend who he thought went down with the ship.

As Uchida, Kamio, and his teenage apprentice, Atsushi, travel to the site on his fishing boat, the narrative shifts between the present and Kamio’s memories of his service as an air defense crewman aboard the warship during the Second World War.

In the spring of 1944, Kamio and other cadets, many of whom are only teenagers, are assigned to the Yamato and are subjected to harsh training and discipline at the hands of Petty Officers Uchida, Moriwaki, and Karaki, who have served on the vessel since it was launched in 1941. In October 1944, the Yamato sails as part of a large Japanese fleet to engage American forces at the Battle of Leyte Gulf. During the battle, the Yamato sustains several hits, killing or injuring several crew. Yamato and the surviving ships return to Japan for repairs, while Uchida (who lost his left eye in the battle) is sent to a hospital to recover.

In March 1945, the crew hear rumors of a planned mission against the expected invasion of Okinawa and are given a few days of shore leave. During this time, Kamio returns home and learns that his mother died protecting his girlfriend, Taeko Nozaki, during an air raid on Kure. Taeko confesses her love for Kamio when he explains that he must go to Okinawa and gives him a special amulet for protection.

Uchida uses the shore leave to escape the hospital and rejoin the crew. Meanwhile, IJN representative Vice-Admiral Ryūnosuke Kusaka arrives and briefs the admiral-in-charge ofYamato, Vice-Admiral Seiichi Itō, and the other senior officers, of the details of Operation Ten-Go. It will almost certainly be a suicide mission – and with no air cover, the entire Japanese force will be extremely vulnerable to Allied attacks, making it unlikely that they will even reach Okinawa. Fights break out among the crew as some believe the mission is futile, but an officer convinces them that the Yamato, as Japan’s last operational battleship, must make every effort to defend the nation.

On the morning of April 7, the Yamato and its escorts assume battle stations after Task Force 58 detects it on the way to Okinawa and sends its strike planes to intercept. The crew opens fire with their anti-aircraft weapons as the planes appear. However, the sheer number of US aircraft overwhelm the defenses and the Yamato takes heavy damage from multiple bombs and torpedo hits. Kamio, Uchida, and Moriwaki continue to man a portside AA battery after strafing runs and accurate bomb hits kill much of the crew, including Karaki. After being told the ship is crippled and sinking, Admiral Itō and Captain Kōsaku Aruga give the order to abandon ship, although both choose to stay behind. Uchida and Moriwaki throw Kamio overboard despite his wish to stay with them to the end. The radioman attempts to call for support but water starts flooding the ship, which eventually capsizes and explodes.

The Yamato's remaining escorts start rescuing the survivors, but Kamio fails to save his friend Tetsuya Nishi despite promising his mother that he would look after him. Moriwaki ties Kamio to be hoisted aboard a rescue vessel and swims away to drown himself.

The film flashes forward to the present day; the old Kamio has a heart attack, but Makiko and Atsushi revive him. He also discusses what happened to him during the final months of the war. He recounts that after the sinking, he went and told Nishi’s mother that her son had died „a hero’s death.” Kamio expresses his grief that, despite risking his life in battle, he was ultimately unable to protect anyone he loved – Taeko died of radiation poisoning after theatomic bombing of Hiroshima, where she had been conscripted to work at a munitions plant. However, she was able to see him before she died and suggested Asukamaru as the name for his boat.

They arrive at the sinking coordinates the following day, where they hold a small ceremony. Makiko scatters Uchida’s ashes and Kamio gives her a dagger that Uchida asked him to keep during the battle. The dagger was Uchida’s most prized possession; Admiral Isoroku Yamamoto gave it to him when the Yamato was his flagship. The three head back to Japan after the ceremony.

The end credits show Makiko laying flowers at a memorial for those who died in the battle.