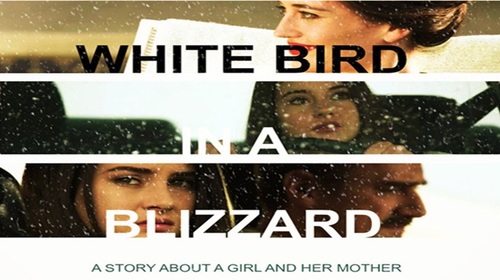 PLOT: In 1988, when Katrina „Kat” Connors (Shailene Woodley) was age 17, her mother, Eve (Green), disappeared without a word. The story weaves back-and-forth with flashbacks of Eve’s past life and the present day.

In the flashbacks, Eve was a wild girl who gradually changed into a domesticated housewife after her marriage to Brock (Christopher Meloni), an ordinary man who leads an uneventful life. While Kat explores her blossoming sexuality with her handsome but dim-witted neighbor and schoolmate, Phil (Shiloh Fernandez), Eve struggles to deal with aging and quenching her youthful wildness. She tries to be sexy when Brock is away, even luring Phil’s attention. After Eve disappeared, Kat deals with her abandonment without much issue, occasionally releasing her own wild side, seducing the detective (Thomas Jane) investigating her mother’s disappearance. The film then jumps forward three years to the spring of 1991. On a break from college, Kat returns home and seems unfazed to learn that her father is in a relationship with a co-worker.

The older detective that Kat has been having an affair with informs her that Brock might have killed Eve after catching Eve cheating. Kat dismisses this theory, just like she did three years ago, but after mentioning the topic to her friends Beth (Gabourey Sidibe) and Mickey (Mark Indelicato) they tell her that they suggested this same theory to her and she dismissed them as well. Kat suspects Phil of sleeping with Eve and confronts him the night before she is to return to college, but Phil angrily rebuffs it and tells her that Brock knows where Eve is.

Kat begins to unpack Brock’s suspiciously locked freezer in their basement, but is stopped when he walks in on her. She questions Brock about her mother’s disappearance, asking if he does in fact know where Eve is, but he denies having any knowledge of her whereabouts. Believing her father, Kat bids her father goodbye and tearfully boards her flight, returning to college. It is revealed that this was the last time Kat saw Brock, as he went out to a bar shortly thereafter and drunkenly admitted to murdering Eve. He is soon arrested and later hangs himself with a sheet in his jail cell as well as showing that Brock moved Eve’s body from the freezer the night before Kat unpacked it.

The film ends with a flashback of Eve’s death; she came home from shopping the afternoon of her disappearance to find Brock and Phil in bed together. Phil dashed out of the room and Eve began laughing hysterically at Brock, incredulous, and he responded by wrapping his fingers around her throat, asking her repeatedly to stop, to which she kept on laughing, and he strangled her to death.