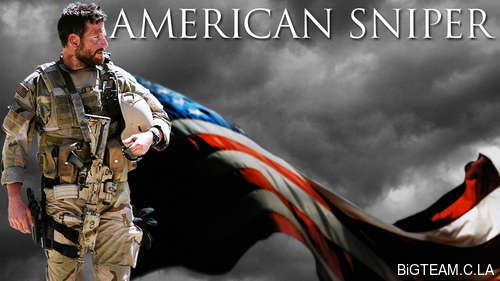 PLOT: Growing up in Texas, Chris Kyle is taught by his father how to shoot a rifle and hunt deer. Years later, Chris is a rodeo cowboy when he sees news coverage of the 1998 U.S. embassy bombings and decides to enlist in the U.S. Navy, where he is eventually accepted for SEAL training, becoming a U.S. Navy SEAL sniper.

Chris meets Taya Renae at a bar, they marry, and he is sent to Iraq after the September 11 attacks of 2001. His first kills are a woman and boy who attacked U.S. Marines with a grenade. Chris is visibly upset by the experience but earns the nickname „Legend” for his many kills. He is assigned to hunt for the al-Qaeda leader Abu Musab al-Zarqawi; during house-to-house searches in evacuated areas, Chris interrogates a family, and for $100,000 the father offers to lead the SEALs to „The Butcher”, al-Zarqawi’s second-in-command whose favorite torture device is a drill. The plan goes awry when The Butcher captures the father and son, and kills them while Chris is pinned down by a sniper using an SVD. Meanwhile, the insurgents issue a bounty on Chris.

Chris returns home to his wife and the birth of his son. He is distracted by memories of his war experiences and argues with Taya over bootleg footage of U.S. Marines shot dead by enemy sniper „savages”. Taya expresses her concern for them as a couple and wishes Chris would focus on his home and family.

Chris leaves for a second tour, promoted to Chief Petty Officer. He is involved in a shoot out with The Butcher, who is located operating out of a ground floor restaurant.

Chris returns home from his second tour to a newborn daughter, and he becomes increasingly distant from his family. On his third tour, the Dragunov sniper seriously injures a unit member, and the unit is evacuated back to base. The unit decides to return to the field and continue the mission. Another SEAL is killed by gunfire, compelling Chris with guilt and duty to undertake a fourth tour. Taya does not understand his decision, tells him she needs him, and for a moment, implies they should stay apart.

On tour four, the SVD-using expert insurgent sniper is identified as „Mustafa”, and Chris is assigned to take him out. Mustafa has been sniping U.S. Army combat engineers building a barricade. Chris’s sniper team is placed on a rooftop inside enemy territory. Chris spots Mustafa and takes him out with a risky long distance shot at 2100 yards (1920 meters), (the 8th longest sniper kill ever recorded), but this exposes his team’s position to a large number of armed insurgents. In the midst of the firefight and low on ammunition, Chris calls Taya and tells her he is ready to come home. A sandstorm provides cover for a chaotic escape in which Chris is injured and almost left behind.

Chris returns home, on edge and unable to adjust fully to civilian life. He tells a Veterans Affairs psychiatrist he is „haunted by all the guys [he] couldn’t save”. The psychiatrist encourages him to help wounded veterans in the VA hospital. Chris meets veterans who suffered severe injuries, coaches them at a shooting range in the woods, and gradually begins to adjust to home life.

Years later, on February 2, 2013, Chris, playful and happy, says goodbye to his wife and family as he leaves to spend time with a veteran at a shooting range. An on-screen subtitle reveals: „Chris Kyle was killed that day by a veteran he was trying to help”, followed by stock footage of thousands of people standing in line along the highway for his funeral procession. Thousands more are shown attending his memorial service at Cowboys Stadium.