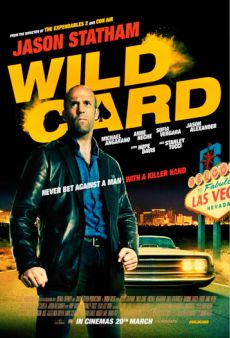 PLOT: Nick Wild (Jason Statham) is a recovering gambling addict, who takes odd jobs in Las Vegas to support his addiction. He accepts a job by self-made millionaire Cyrus Kinnick (Michael Angarano), to show him around Vegas and provide him with protection while he gambles.

While eating at a diner, the waitress gives Nick a note from Holly (Dominik Garcia-Lorido) – who asks him to stop by her house. At her house, Holly explains to Nick that she had a date the previous night at ‘The Golden Nugget’. After the date, she was brutally raped and beaten by three unknown men in their hotel room. Holly tells Nick that she wants him to find out who they are so that she can sue them, though unbeknownst to Nick, she plans to take revenge.

Nick discovers that the man responsible for raping Holly is a gangster called Danny DeMarco (Milo Ventimiglia). It is also revealed that after raping and beating Holly, DeMarco had his two men dump her in a hospital car park. Nick goes to the hotel to confront DeMarco, disguised as someone sent by another criminal. The confrontation turns out to be unsuccessful but Nick defends himself. DeMarco and his men up are tied up and Nick calls Holly. After arriving at the hotel room, Holly contemplates castrating DeMarco, though after DeMarco breaks down and begs for forgiveness, Holly decides to take $50,000 from DeMarco’s desk and leave. Outside the hotel, Holly splits DeMarco’s money with Nick, and decides to leave Las Vegas. After Holly departs, Nick decides to take Cyrus to a casino and gamble with his half of DeMarco’s money. He suddenly has a winning streak, and eventually has a total of $506,000 in casino chips. When cashing in the money, Nick has a sudden anxiety attack and tells Cyrus that even though the $500,000 will last him for many years; it isn’t enough to last him for a lifetime. After going back to the casino tables, Nick loses all of his money in a single bet. When leaving the hotel, Nick is attacked by DeMarco’s men, and has to fight his way out of the casino.

The next day, Nick goes to a meeting with Baby (Stanley Tucci), who happens to be the mafia boss of Las Vegas. It is revealed during the meeting that Baby has received a complaint from DeMarco. DeMarco claims that Nick broke into his hotel room, pistol-whipped him, and killed two of his men – all to fund his gambling addiction. Baby warns Nick that if he cannot prove his innocence, he will have to be killed for assaulting DeMarco and for murdering two members of the mafia. Nick tells Baby that DeMarco is lying, explaining that DeMarco had raped Holly, and had killed two of his own men because they had witnessed him pleading for his life. To prove he is telling the truth, Nick tells Baby that when Holly considered castrating DeMarco, she had cut the side of his penis with garden shears. Baby asks DeMarco to pull down his pants and prove Nick wrong, but after he refuses, Baby concludes that DeMarco is lying and lets Nick go free.

After the meeting with Baby, Nick goes back to his local diner for some coffee. At the diner, he is confronted by Cyrus. Cyrus offers Nick $500,000 and a plane ticket to Corsica, but only if he helps him ‚become’ a man. While Nick is considering the offer, DeMarco and his men appear in the diner. Cyrus then starts singing, creating a distraction for Nick. After realizing that DeMarco won’t stop until he is dead, Nick finally kills DeMarco and all of his men with two eating utensils. Before Nick leaves, Cyrus gives him a cheque for $500,000 and the plane ticket, telling him that he has earned it. After accepting the gift, Nick and Cyrus say goodbye to each other. Nick then leaves Las Vegas for good.