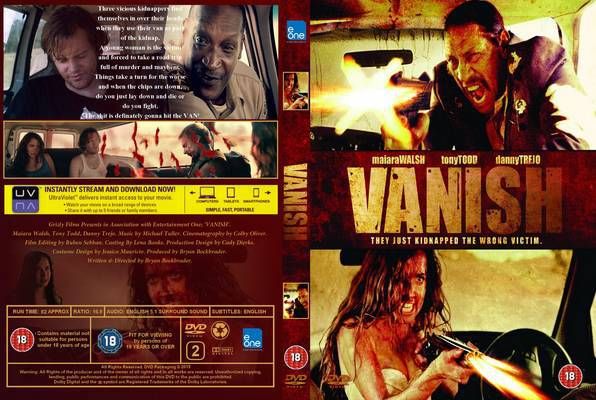 PLOT: While driving a van through Los Angeles, half-brothers Jack and Max argue about Jack’s ex-girlfriend, Jasmine, who has called him to demand he retrieve his possessions from her place. Max says Jasmine never loved Jack and has always been obsessed with her dead boyfriend, who died in a carjacking. After arriving at a posh mansion, they don masks, pull out pistols, and kidnap Emma, who fights back. As they subdue her, Max shoots a neighbor who comes over to investigate, angering Jack, who did not want to resort to violence.

Emma, who Max knocked unconscious, wakes while a third conspirator, Shane, is unmasked. When Shane uses Max’s real name, the others exasperatedly remove their masks, reasoning that their cover has been blown. They force Emma to record a ransom demand for her wealthy father. She reveals she has not spoken to her father in several years and calls her kidnappers incompetent amateurs. Afterward, she warns the men that her father will likely not pay the ransom, but when he calls them back, Jack threatens to kill Emma unless he does.

Shane, Jack’s war buddy from Iraq, drives them to a motel, where they stash Emma. While they are in their rooms, Mexican cartel hit men search the van and recognize the name of the owner as a possible hit they performed, though they are not sure. Jack surprises them, kills one, and questions the other. Jack learns they tracked the kidnappers through Emma’s cell phone and that Carlos, Emma’s father and a major cartel boss, has no intention of paying the ransom. After executing the remaining hit man, he quickly gathers the others, and they flee the motel.

Jack explains he never intended to collect the ransom but instead suspects that Carlos killed both Emma’s mother and his father, who were having an affair. As evidence, he shows a ring to Emma, who verifies that it belongs to her father. Shane, a drug addict desperate for money, protests against what he believes to be a suicide mission, but Max agrees to follow through the new plan. Before they can reach the agreed upon checkpoint, a cop stops them. Max, suspicious that the cop is on to them, murders him, causing Shane to believe that Max is an unreliable psychopath. Max also confesses to being the carjacker who killed Jasmine’s previous boyfriend, as he wanted to give Jack a better chance at a relationship with Jasmine.

When they next stop, Shane, unnerved by Max’s confession, secretly proposes an alliance with Emma. Emma draws Jack and Max out of the van when she says she must urinate, and Shane searches the vehicle for a weapon. Max returns just as Shane breaks a shotgun out of its lock box. Max taunts Shane and says that it takes a psychopath to recognize one; Shane agrees, and pulls the trigger. Max taunts him further when it becomes obvious Shane did not load the weapon. Enraged, Shane stabs Max to death, then explains to Jack that Max attacked him. Shane uses the empty shotgun to disarm Jack, and he drives off with Emma, who agrees that Jack’s revenge plot is doomed.

After driving a short distance, Shane reveals that he has PTSD and used heroin to calm his nerves, as he was prone to fits of violence against women. As Emma becomes increasingly nervous, he grows more aggressive, eventually revealing that he is a serial rapist. As he prepares to assault her, she fights back and wounds him with a power tool left in the van. After Shane stabs her in retaliation, Jack reappears after Emma kills Shane. Emma drives to the checkpoint, where she meets with her father and explains that she has killed all the kidnappers herself. When she demands an explanation from her father, he finally admits to killing Jack’s father and Emma’s mother. Together, Emma and Jack, who was hiding, kill Carlos, then defeat his cartel henchmen, though Jack dies of his wounds. Bloodied and injured, Emma pushes Jack’s body from the van and drives off.