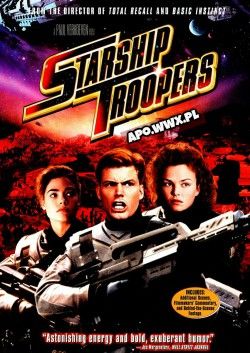 PLOT – In the 23rd century, Earth has become a space-faring federation. While colonizing new planets, humans have encountered an insectoid species known as Arachnids or „Bugs”, with their home being the distant world Klendathu. The bugs appear to be little more than killing machines, though there are suggestions that they were provoked by the intrusion of humans into their habitats.

In the federation, citizenship is a privilege earned by serving through such activities as military service, granting them opportunities prohibited to basic civilians. John „Johnny” Rico (Casper Van Dien), his girlfriend Carmen Ibanez (Denise Richards) and best friend Carl Jenkins (Neil Patrick Harris) attend high school in Buenos Aires. Fellow student Isabel „Dizzy” Flores (Dina Meyer) is in love with Rico, but he does not reciprocate. They enlist in the Federal Service after graduation. Carmen becomes a spaceship pilot assigned to the Rodger Young, while mentally gifted psychic Carl joins Military Intelligence. Rico enlists in the Mobile Infantry expecting to be with Carmen, but is surprised to find Dizzy, who deliberately transferred to his squad to be near him.

At Mobile Infantry training, brutal Career Sgt. Zim (Clancy Brown) trains the recruits. Rico is promoted to squad leader and befriends Ace Levy (Jake Busey). He later receives a Dear John letter from Carmen, as she desires a career with the fleet and now serves under Rico’s high school sports rival, Zander Barcalow (Patrick Muldoon). After a live-fire training incident that kills one of Rico’s squad and causes another to quit out of guilt, he is demoted and flogged. He resigns and calls his parents, but the call is cut off when an asteroid, supposedly launched by the Arachnids, obliterates Buenos Aires, killing his family and millions of others. Rico rescinds his resignation and remains with the Infantry as an invasion force is deployed to Klendathu.

The first strike on Klendathu is a disaster, with hundreds of thousands of casualties. Rico is severely wounded in the leg and mistakenly classified KIA, causing Carmen to believe he is dead. Rico, Ace and Dizzy are reassigned to the ‚Roughnecks’, commanded by Lt. Jean Rasczak (Michael Ironside), Rico’s former high school teacher. Rico is promoted to corporal and eventually reciprocates Dizzy’s love for him. The Roughnecks respond to a distress call from Planet „P”, where they discover an outpost that has been devastated by Bugs. The distress call ends up being a trap and the Arachnids swarm the outpost. Rico, now Acting Sergeant, euthanizes a mortally wounded Rasczak after a Tanker Bug bites off his legs, and after a Bug stabs Dizzy in the torso, she dies in Rico’s arms as they are rescued by Carmen and Zander. Rico and Carmen reconnect and encounter Carl, now a high-ranking intelligence officer, at Dizzy’s funeral. Carl reveals that there is a reason to believe an intelligent „brain bug” is directing the other Bugs and has been learning how to fight against humans. He field-promotes Rico to lieutenant and gives him full command of the Roughnecks, ordering the infantry to return to „P” and capture the brain bug.

As Rico’s Roughnecks join the mission, the Fleet encounters fire from the Bugs and Carmen’s ship is destroyed. The escape pod carrying Carmen and Zander crashes into the Bug tunnel system near Rico. Unknowingly guided by a psychic suggestion from Carl, Rico takes Ace and Sugar Watkins (Seth Gilliam) into the tunnels to rescue both. They find Carmen and Zander surrounded by several types of Arachnids including the Brain Bug, which had used its proboscis to pierce Zander’s skull and eat his brain. Before it can take Carmen’s brain she cuts off the proboscis with a knife Zander gave her. Rico threatens the Bugs with a small nuclear bomb, which the Brain Bug is able to recognize and allows them to leave. Arachnids pursue them and Watkins is mortally wounded, sacrificing himself by detonating the bomb to kill them while the others escape. After returning to the surface, they find that former Sgt. Zim, who had requested demotion to private so that he could serve at the front, has captured the Brain Bug. Carl congratulates Rico and tells him and Carmen that the humans will soon be victorious, now that Military Intelligence can study the brain bug, which Carl reveals through a psychic scan is afraid. A propaganda clip is shown starring Carmen (now a captain commanding a battleship), Ace and Rico as model servicemen, encouraging viewers to enlist.