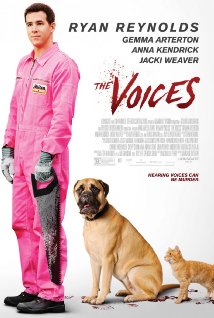 PLOT: Jerry is an upbeat man who experiences severe hallucinations in his day to day life. He works at a bathtub factory, and lives on his own above a bowling alley. His hallucinations cause him to frequently converse with his dog Bosco and his cat Mr. Whiskers, who manipulate his actions and beliefs. One day, his manager compliments his hard work and chooses him to help organise an employee barbecue. During the preparations, he meets an English lady named Fiona and asks her on a date, but she stands him up to go to a karaoke party. When she is unable to get home, Jerry finds her hitchhiking and gives her a ride, but crashes into a deer in the forest. Jerry’s hallucinations show the deer crying out in pain and begging Jerry to kill it, and so he slits its throat. Fiona, terrified, runs off into the woods. Jerry pursues her but accidentally stabs her. Apologising for his actions, he then stabs her repeatedly to end her pain and kill her.

Upon returning home, Bosco tells him to go the police and confess, and that he is a good man who just made a mistake. On the flip side, Mr. Whiskers says there is no shame in killing, but insists Jerry needs to dispose of the body. Jerry collects it from the forest and returns home with it. He dismembers Fiona and places her innards in numerous plastic boxes, and her disembodied head inside his fridge. Her head begins to talk to him, forgiving him for his actions, but insisting he takes his medication to end his behaviour. Jerry takes his pills, and experiences nightmares of his abusive past. When he wakes up during the night, his hallucinations have ended; his pets no longer speak to him, and Fiona’s head is cold and rotten. He throws away the pills in terror, and the next morning, his hallucinations resume and his happy life is back to normal. Fiona tries to convince Jerry to kill someone else, but Jerry insists that he can’t.

Jerry asks Lisa, a colleague of Fiona’s from accounting, on a date. He develops feelings for her and takes her to his abandoned childhood home, where it is revealed his German mother had confessed to her insanity and was about to be taken away by the authorities when he was a child. When they arrived, she tried to slit her throat, and begged Jerry to finish the job to end her suffering. Jerry sobs in front of Lisa, who comforts him. They go back to her house and spend the night together. When Jerry returns home the next morning, he still feels pressured into killing someone else by Fiona and Mr. Whiskers, and seems unsure of what to do next.

Lisa finds out Jerry’s address through accounting and delivers a gift to his house. When Jerry inadvertently locks himself out, he tries to get back in through the sky light, but Lisa manages to force the door open. She wanders in and discovers the remnants of Fiona’s body. Jerry is heartbroken that she would infiltrate his home in such a way, but despite pressure from Mr. Whiskers, he refuses to kill her. Lisa insists they can go back to normal and forget what happened, but when she tries to escape, Jerry throws her aside and accidentally breaks her neck. After she dies, Jerry cuts her body apart and places her head in the fridge, next to Fiona’s. Other workers from accounting begin to realize Fiona and Lisa have gone missing. When their colleague Alison goes to Jerry’s house to ask if he knows where they are, Jerry immediately kills and dismembers her.

Jerry confesses his killings to his counselor Dr. Warren. She tries to call the police, but he takes her hostage into the countryside and forces her to help him. She calms him down and shows understanding, which makes him feel better. Meanwhile, the other workers from accounting break into Jerry’s home (as Bosco runs away) and discover the remains of Fiona, Lisa, and Alison, and immediately retreat and call the police. When Jerry returns home, still holding Warren hostage, the police surround his house and prepare to move in. Jerry takes Mr. Whiskers into the bathroom and then flees down into the basement, breaking a pipe while doing so. After rescuing Dr. Warren, the police are knocked back from a huge explosion that was caused by the gas leak from the broken pipe.

Down in the bowling alley, Jerry collapses and dies from smoke inhalation. In a white void, Bosco and Mr. Whiskers confess that, despite their opposing beliefs, they did like each other, before going their separate ways. Jerry then appears with his parents, Fiona, Lisa, and Alison, and Jesus, and they all dance together.