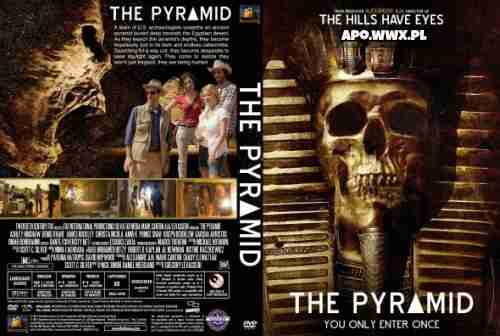 PLOT – A team of archaeologists discover a vast pyramid buried under the Egyptian desert; a pyramid that has three sides and not four like the pyramids of Giza, Egypt. The team ordered to leave the site due to an uprising in Giza, and mostly due to the toxic fungal gas within the tombed pyramid. But to the debate between both father and daughter, Dr. Miles Holden and Dr. Nora Holden, they stay to get a glimpse of the pyramid, and send a robot, Shorty, in to investigate. After Shorty’s destruction by unknown means, they make their way inside to recover it. They rapidly become lost, and a section of floor collapses beneath them, wounding and trapping Zahir (Amir K) pinning his leg to the ground by fallen debris. While attempting to climb back up, Sunni (Nicola) is scratched across the face by an unseen creature and falls. Leaving Zahir behind to find another way out, they hear him scream, and return to find only a bloody trail leading up the wall.

They are pursued through a narrow tunnel by creatures revealed to be cats that have survived for nearly thousands of years by cannibalism when a soldier, Shadid, finds and rescues them. But he is then pulled back into the tunnel by an unseen and powerful force. Shortly after escaping a sand trap, Sunni is pushed into a spike pit and fed on by the scavenger cat beasts, dying shortly after her fatal wounds. After finding a burial chamber and speculating about an escape route, Dr. Miles Holden (O’Hare) has his heart torn out from behind. His daughter, Dr. Nora Holden, and the cameraman Fitzie (Buckley) flee, though Fitzie shortly returns to discover Anubis weighing Miles' heart against Ma’at to determine entry to the afterlife. Miles is deemed unworthy and crumbles to dust. It is afterwards they learn that the pyramid was constructed to imprison Anubis, who was unforgiving and merciless in his goal to reunite with his father/creator, Osiris. Finding a journal from a Free Mason explorer, an occupant who had previously discovered the pyramid years ago, they find a way out, but are chased after by Anubis, and Fitzie is discovered and killed. Nora is temporarily captured and soon to be judged by Anubis, but manages to escape with the help of the scavenger cats, and passes out near the pyramid’s exit. She wakes to discover a child above her, before Anubis lunges at them both.