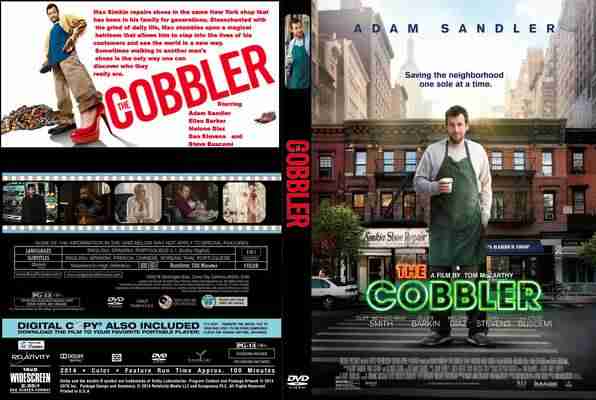 PLOT: In the Lower East Side of New York City in 1903, a group of Jewish men are gathered in the shop of a cobbler to discuss a problem that has been plaguing them. A crook named Gergerman has been running their businesses out and harassing the men and their families. The men hand over a pair of Gergerman’s shoes to the cobbler, Pinchas Simkin. Pinchas takes the shoes to the basement of his shop and uses a special stitching machine to work on the shoes. His young son Herschel enters, and Pinchas explains to him the importance of the machine.

In the present day, Max Simkin works as the cobbler in the shop. His work neighbor is Jimmy, who operates the barber shop next door. A young woman named Carmen Herrera comes in to tell Max that she is working with the community of the Lower East Side to prevent big time developers from tearing down parts of the neighborhood to build huge complex buildings. Max doesn’t seem to care at all what happens to the shop. Max lives at home with his ailing mother Sarah. The two of them wish they could see Max’s father one more time.

A local thug named Leon Ludlow goes into the shop for Max to replace the soles in his shoes. Max’s current stitching machine fails, so he uses the one that his ancestors used. Out of curiosity, he checks Ludlow’s shoe size to see that he wears a size 10 1/2 like Max. Max tries the shoes on, and to his surprise, he literally becomes Ludlow. He grabs other shoes and uses the machine on it, realizing what he can do with this.

Max uses this newfound ability to take people’s shoes and live as someone else. He goes to Chinatown as a Chinese man to enjoy the day. He then goes to a restaurant as another man and leaves without paying for his meal. He also takes the shoes of a British man named Emiliano after his girlfriend Taryn brought them in. As Emiliano, Max goes to a bar and is noticed by beautiful women. One woman approaches him and notes that she saw him somewhere leaving with a man. Max then finds out where Emiliano lives and sees Taryn taking a shower. She invites him to join her. He eagerly starts to take off his clothes until he realizes that once he takes off even one shoe, he will no longer be Emiliano, so he leaves. Max decides to make his mother happy by using the shoes that belonged to his father Abraham. He has dinner with Sarah as Abraham and gives her one more night of happiness.

The next morning, Max finds that Sarah has died. He and his family sit shiva for the week. When he returns to work, Ludlow demands that he get his shoes back or he’ll kill Max. Max gets multiple shoes and follows Ludlow in disguise back to his apartment. Using Ludlow’s shoes, he meets Ludlow’s girlfriend Macy, who has apparently been abused by Ludlow. Max goes into Ludlow’s room to find his watches, and ends up uncovering a cache of guns and other weapons. The real Ludlow returns and starts to choke out Max (still wearing Ludlow’s shoes) until Max zaps him with a taser. Max joins two thugs that think he is Ludlow to an area where they are holding a man captive for stealing from them. They are about to kill him on Ludlow’s orders until Ludlow-Max tells them to let the guy go. Furthermore, Max is taken to the home of a slum lord named Elaine Greenawalt. She gives Ludlow-Max a large amount of money to buy out a man from his building.

Max goes back to Ludlow’s home wearing the stilettos of a cross-dressing man. Ludlow attacks him again until Max removes a shoe, startling Ludlow when he sees Max. He tries to attack Max again until Max accidentally sticks the other stiletto in Ludlow’s neck, killing him. Max turns himself into the police, but when they return to the apartment, Ludlow’s body is gone, and the blood is cleaned up. The police leave Max alone and confused. Jimmy confronts Max about his recent odd behavior. He tells Max that his father did the same thing before he disappeared, and that he kept this a secret from Max to protect him.

Max joins with Carmen to the apartment of Mr. Solomon, the man that Greenawalt is trying to buy out. He refuses to leave, as he has lived there for decades and even raised his daughter there. Max comes up with a plan to trick Greenawalt into giving him a large amount of money while still letting Solomon keep his home. When Greenawalt realizes she’s been played, she goes to Solomon’s home and threatens him with murder. She is caught on camera by a local news reporter, and she is later arrested. Max’s life starts to go back to normal. Carmen goes into the shop and invites him out to dinner, which Max accepts. He later goes to Ludlow’s home as Ludlow to return the watches to Macy, and he tells her that he’s sorry and that she deserves better. As he leaves, he is abducted by a group of men led by the same man that stole from Ludlow’s gang. They are about to drive off when their car is struck.

Max wakes up in Jimmy’s barber shop. Jimmy offers him some water and a pickle, stating that pickles help with the transition from one body to another. Max asks how he knew about that, and Jimmy takes off his shoes to reveal that he was Abraham the whole time. Both elated and angry, Max hugs his dad. Abraham brings him to the basement to show him a huge collection of shoes that he’s gathered over the years. Abraham then takes Max to his limo and rides with him through the city as he starts to tell him the story of how the stitching machine came into their family’s possession.