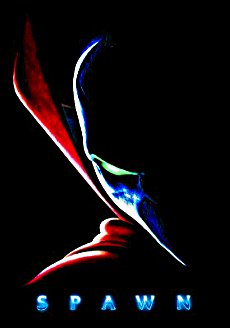 PLOT: Al Simmons, a military soldier/assassin, is betrayed by Jason Wynn, the head of a covert government agency. Wynn assigns Simmons a mission to take out a Bio-Chem plant inNorth Korea while ordering his top assassin, Jessica Priest, to assassinate him. After Simmons dies from a gas fire caused by Wynn, he arrives in Hell, where Malebolgia, the Devil, offers him a Faustian deal. If Simmons becomes his eternal servant and leader of his army in Armageddon, he will be able to return to Earth to see his fiancée, Wanda Blake. Simmons accepts the offer and is returned to Earth.

When he returns, Simmons learns that five years have passed. Wanda is now married to his best friend, Terry, and living the life he longed for, including the daughter he never knew, Cyan. He encounters a strange clown-like demon called The Violator, who acts as a guide, setting „Spawn” onto the path to evil. He also meets a mysterious old man named Cogliostro, a fellow Hellspawn who freed his soul and now fights for Heaven. Wynn has become a high-class weapons dealer and developed the ultimate biological weapon, „Heat 16”. During a reception, Simmons attacks Wynn, kills Jessica, and escapes, instinctively using Spawn’s strange armor.

Following Simmons’ attack, The Violator convinces Wynn to have a device attached to his heart that will trigger the worldwide release of Heat 16 should his vital signs flatline. The device is supposedly a safeguard against assassination attempts, but Malebolgia actually wants Simmons to kill Wynn and trigger the apocalypse. Spawn confronts The Violator, who turns into his demonic form and beats him down. Cogliostro rescues him and teaches him how to use his necroplasm armor before Spawn learns that Clown and Wynn are going to kill Terry.

Meanwhile, Terry has just finished emailing a fellow newsman who sent him evidence exposing Wynn. After the transmission, Cyan enters the room, with Wynn right behind her. Wynn destroys Terry’s computer and takes the family hostage. When Spawn arrives, he ends up almost killing Jason Wynn, despite his warning that his death will launch the Heat 16 bombs. Only after realizing that Jason’s death would ultimately mean the death of Cyan does he relent. Instead, he extracts the device from Wynn’s body before destroying it. His plans foiled, Clown draws Spawn and Cogliostro into Hell, where Spawn tells Malebolgia that he will never lead his army. He escapes with Cogliostro just before they are overwhelmed and returns to the real world. The Violator follows and there is a final battle between him and Spawn, ending with Spawn severing the demon’s head with his chains. Wynn is arrested and Spawn, realizing there is no place for him in Wanda’s world anymore, dedicates himself to justice rather than succumbing to his lust for vengeance.