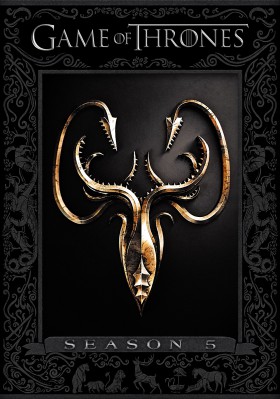 – In Meereen, the Sons of the Harpy have started to revolt against Daenerys Targaryen’s regime. To regain peace and control, Daenerys complies with the request of re-opening the fighting pits while taking Hizdahr zo Loraq as her husband.

Tyrion Lannister and Varys arrive in Pentos and they begin their journey to Meereen. They pass through Volantis, where Tyrion is abducted by Jorah Mormont, who takes him to Meereen as a way to redeem himself to Daenerys but she takes Tyrion as her advisor. The Sons of the Harpy mount an attack on Daenerys, Drogon reappears and Daenerys flies away on his back, landing in the Dothraki sea.

At the Wall, newly elected Lord Commander of the Night’s Watch, Jon Snow forms an alliance with the Wildlings. They begin evacuating Wildlings at Hardhome, when the settlement comes under attack from White Walkers and their wight armies. Samwell Tarly and Gilly leave for Oldtown and Maester Aemon passes away, the majority of the Night’s Watch become disillusioned with Jon’s leadership and see him as a traitor. They lure Jon into a trap and stab him, leaving him to die.

Littlefinger puts Robin Arryn in the care of House Royce and leaves for Winterfell with Sansa Stark. In Winterfell, Sansa marries Ramsay Bolton to form an alliance between the Vale and the Boltons. Ramsay subjects Sansa to physical and psychological abuse. Reek reveals to Sansa that he did not kill Bran and Rickon, the two escape together.

At his camp in the North, Stannis acquiesces to Melisandre’s demands to burn Shireen alive as a sacrifice to the Lord of Light. This leads to Selyse committing suicide and half of Stannis’s forces deserting with all of the horses. Melisandre flees for Castle Black. The remaining Baratheon forces march on Winterfell, but are defeated by the Boltons. After the battle, a wounded Stannis is killed by Brienne of Tarth.

In King’s Landing, Lancel Lannister becomes a member of the „Sparrows”. Following the wedding of Margaery Tyrell and Tommen Baratheon, Cersei Lannister authorizes the revival of the Faith Militant, the military wing of the Faith of the Seven. The Sparrows begin imposing their puritanical views upon King’s Landing by ridding it of all „sins”. They proceed to imprison Loras Tyrell, as well as Margaery and Cersei herself for committing various sins.

In Dorne, the Sand Snakes, the bastard daughters of Oberyn Martell, along with Ellaria Sand, seek vengeance for his death. After a message arrives in King’s Landing from Dorne, Jaime Lannister and Bronn travel to Dorne to rescue Myrcella Baratheon. Oberyn’s brother, Doran Martell, discovers that Ellaria had sent the message and allows Jaime and Myrcella to leave for King’s Landing, provided Myrcella’s betrothed Trystane Martell goes with them. En route to King’s Landing, Myrcella dies, having been poisoned by Ellaria.

Arya Stark arrives in Braavos and begins training with the Faceless Men, guided by Jaqen H’ghar and the Waif. However, after Meryn Trant’s arrival in Braavos, Arya steals a face from the House of Black and White and kills him. Upon her return to the temple, Arya is struck blind.