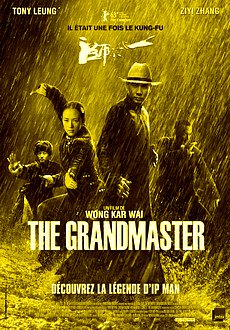 PLOT: The film narrates the life of the Wing Chun grandmaster Ip Man from the 1930s in Foshan, his flight to Hong Kong after the Second Sino-Japanese War, and the events leading up to his death.

The movie begins with Ip Man reflecting on martial arts, and then cuts to a scene of a fight under the rain between Ip and a dozen combatants. Ip Man wins, and experiences flashbacks of his life, from his early training at the age of seven to his induction into martial arts by his master Chan Wah-shun, and his marriage to his wife Cheung Wing-sing.

Ip Man’s peaceful existence is threatened by the arrival of Gong Yutian, the Wudang Boxing martial arts grandmaster from northern China, who announces that he has already retired and has appointed Ma San as his heir in the North. He then concedes that the South should have its own heir. A flurry of discussions and fights erupt as various masters attempt to challenge Gong, but they are all barred by Ma San. As the Southern masters are deliberating on a representative, Gong Yutian’s daughter Gong Er arrives and she tries to convince her father not to continue the fight, as she feels they are all unworthy. Meanwhile, the Southern masters decide on Ip Man to represent them, and Ip proceeds to be tested by three Southern masters before he challenges Gong Yutian. However, the „fight” between Ip and Gong turns out to be actually an exchange of philosophical ideas. Gong declares Ip the winner and returns to northern China. However, Gong Er sets out to regain her family’s honour by challenging Ip Man, and they agree that if anything breaks, Ip loses. „Kung Fu is about precision”, so whoever breaks a piece of furniture during the fight will be the loser. An intense fight breaks out between Ip Man and Gong Er, which concludes with victory for Gong because Ip broke a step at the very end. Ip and Gong then part on friendly terms, with Ip saying he wants a rematch.

Ip Man and Gong Er keep in contact after parting ways by exchanging letters, and Ip intends to bring his family with him to northern China, but his plans are disrupted by the outbreak of the Second Sino-Japanese War in 1938. During the war, Ip Man and his family descend into poverty and he loses his two daughters due to starvation. In the meantime, in northern China, Ma San becomes a hanjian and ends up killing Gong Yutian. When Gong Er returns, she confronts her elders for forsaking her father but they tell her that her father’s final wish was for her to be happy and not to seek vengeance. Gong Er refuses to accept that, and she vows to never teach, marry or have children her entire life, in order to choose the path of vengeance.

Ip Man moves to Hong Kong in the hope of starting a career as a martial arts teacher, but ends up facing all sorts of challenges because there were also numerous other martial arts masters. He defeats them soundly and earns a reputation. He meets Gong Er again on Chinese New Year’s Eve 1950 and asks her for a contest one more time while implying that she should start rebuilding her martial art school. But Gong Er refuses, stating that many martial arts disappeared in the course of history; and that hers would not be the only one. A flashback 10 years earlier shows a confrontation between Gong Er and Ma San at a train station on Chinese New Year’s Eve 1940, and Gong kills Ma after a brutal and intense fight. However, Gong herself is heavily injured and loses her desire to use martial art.

The film then fast-forwards to 1952, when Ip Man and Gong Er meet each other for the last time. Gong confesses to Ip that she has had romantic feelings for him right from the beginning. She dies shortly after. Ip explains in a voice over that in the fight with Ma San, Gong was injured so badly she turned to opium for the pain and this was her downfall. The final scenes offer a visual montage as Ip Man’s school flourishes, including a statement that Ip made Wing Chun popular worldwide and his most famous student was Bruce Lee. Off screen, it is stated that Ip Man died in 1972.