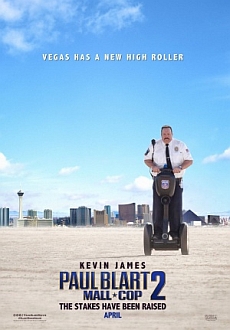 PLOT: Six years after the events of the first film, Paul Blart (Kevin James) is recovering from several misfortunes. His wife Amy (Jayma Mays) divorced him six days into their marriage, and his mother Margaret (Shirley Knight) is killed after being struck by a milk truck. Paul receives an invitation to a security officers’ convention in Las Vegas, however, and begins to believe his luck is about to change. His daughter Maya Blart (Raini Rodriguez) discovers that she was accepted into UCLA and plans to move across the country to Los Angeles, but in light of her father’s invitation, she decides to keep the information secret for now.

Paul and his daughter fly to Las Vegas and are accommodated at the Wynn Hotel. Paul meets the general manager, an attractive young woman named Divina Martinez (Daniella Alonso). Although he believes she’s flirting with him, Divina is already dating the hotel’s head of security, Eduardo (Eduardo Verástegui). Meanwhile, Maya falls in love with the hotel’s valet, Lane (David Henrie). Another security guard from the Mall of America attending the convention, Donna Ericone (Loni Love), is aware of Paul’s heroics in saving the West Orange Pavilion Mall in the previous film and suggests that Paul will be the likely keynote speaker at the event. However, it’s revealed that another security guard, Nick Manero (Nicholas Turturro) is giving the speech that night, dealing a blow to Paul.

In the midst of the convention, Vincent (Neal McDonough) and a gang of accomplices disguised as hotel employees are secretly plotting to steal priceless works of art from the hotel and replace them with replicas. Paul in the meantime has become overprotective of Maya after discovering her fling with Lane and spies on their conversations. He is later mocked by Eduardo for his lack of professionalism in an event where hotel security was notified when Maya went missing. In an argument with her father, Maya boldly claims she’s attending UCLA despite Paul’s wishes that she stay closer to home.

At the convention, Paul hangs out with Donna and three other security guards checking out all the non-lethal security equipment on display. Later, Paul finds one of the guards, Manero, drunk hitting on a woman at the bar. Paul attempts to diffuse the situation and Manero passes out, giving Paul a chance to be the event’s speaker. He contacts Maya asking her to attend, but he learns that she’s at a party with Lane. As Paul prepares his speech, Vincent and his cohorts begin pulling off their heist. Maya absent-mindedly walks into their suite and is taken hostage. When Lane looks for her, he’s kidnapped as well. Paul gives a rousing speech that moves everyone at the convention, as well as Divina, who inexplicably finds herself becoming more attracted to Paul with each passing moment. Following the speech, Paul learns about Maya and Lane’s situation and rushes to help but passes out due to his hypoglycemic condition that has plagued him for years. Drops from a girl’s melting ice cream cone revives him.

Out of blind luck, Paul is able to take down several of Vincent’s thugs and gathers intel on the group’s intentions. Using the non-lethal equipment from the convention, he is able to take out more of Vincent’s crew. Meanwhile, Maya and Lane overhear one of Vincent’s henchmen offering him an oatmeal cookie and learn that he rejects it due to a violent oatmeal allergy. Working with a team – Donna, Saul Gundermutt (Gary Valentine), Khan Mubi (Shelly Desai), and Gino Chizzeti (Vic Dibitetto) – Paul is able to dismantle Vincent’s operation, albeit in clumsy fashion.

Realizing he’s been foiled, Vincent takes Maya and Lane to the roof of another building. Eduardo runs into Paul, who at first thinks Eduardo is working with Vincent. However, Eduardo reveals he was just jealous about Divina’s attraction to Paul, and the two settle their differences and work together. Using a gun that fires sticky material, Paul’s feet accidentally get stuck in a misfire. Vincent gains the upper hand, but as he’s about to shoot Paul, Maya smears oatmeal skin concealer all over Vincent’s face remembering his oatmeal allergy. Vincent breaks out in hives causing him to go blind. Paul jumps out of his shoes and takes out Vincent with a headbutt. The artwork is returned safely and the security guards honor Paul with a medal of valor. Paul decides to let Maya attend UCLA and returns to life as a mall security guard in New Jersey.