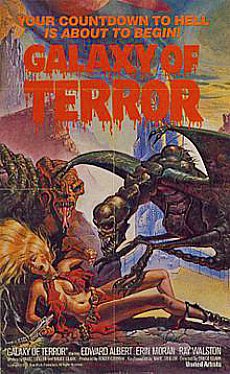 PLOT: On a desolate, storm-lashed planet called Morganthus, the last survivor of a crashed spaceship is attacked and killed by an unseen force.

On another planet a very long distance away, two figures are seen playing a strange game. One, an old woman named Mitri, is identified as the controller of the game while the other, whose head is obscured by a glowing ball of red light, turns out to be an all-powerful mystic called the Planet Master. The two speak cryptically of things being put into motion, and the Master instructs one of his military commanders to send a ship to Morganthus.

Without delay, the spaceship Quest blasts off to Morganthus. Piloting the ship is Captain Trantor, a survivor from a famous space disaster that has left her psychologically scarred and unstable.

As the Quest approaches the planet’s atmosphere, it suddenly veers out of control and plunges toward the surface, crash-landing there. After recovering from the landing, the crew prepare to leave the Quest and search for survivors. The team has a psi-sensitive woman among their number named Alluma (Erin Moran). Both she and the surface team have significant problems with team leader Baelon (Zalman King), who is pushy and arrogant and totally unimpressed by Alluma’s inability to detect any lifesigns whatsoever.

Making their way across the landscape of the planet, they eventually reach the other vessel. Entering, they find evidence of a massacre that took place. The rescue teams split into two and explore the craft. They find further evidence of something catastrophic having happened and, after disposing of the rest, take one victim back for analysis. Cos, the highly-strung youngest member of the team, despite being reassured by his seniors, becomes increasingly terrified by being on the ship and, a short time later, he is killed by a grotesque creature.

The crew discover that something from the planet pulled them down, and in order to escape, they must investigate. After some exploration, they discover a massive pyramid-shaped structure, which Alluma describes as „empty” and „dead”. Their explorations of the pyramid lead to a series of exceedingly violent and deadly encounters in which a malevolent force causes several crew members to be dismembered, burned, consumed, raped or crushed to death by monsters created out of each person’s unique set of fears.

Eventually, only two members of the team, Ranger (Robert Englund) and Cabren (Edward Albert), remain alive. Deep inside the pyramid, Cabren encounters the Master (Ray Walston), who has been masquerading as the cook on board the Quest. The Master explains that the pyramid is actually an ancient toy for the children of a long-extinct race, built in order to test their ability to control fear. Cabren kills the Master for allowing his crew to die, but becomes the new Master in his place.