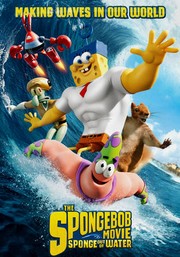 PLOT: A pirate named Burger-Beard travels to the island of Bikini Atoll to obtain a magical book that makes any text written upon it come true. The book tells the story of SpongeBob SquarePants, a childlike sea sponge who loves his job as a fry cook at the Krusty Krab fast food restaurant and faithfully guards the secret Krabby Patty secret formula from Plankton, owner of the Chum Bucket and business rival to Mr. Krabs, SpongeBob’s boss.

In the undersea town of Bikini Bottom, the Krusty Krab is attacked by Plankton. After a military battle with giant foods and condiments, Plankton feigns surrender: he uses a decoy of himself to offer the greedy Mr. Krabs a fake penny, which he hides inside to gain access to Krabs’ vault. The Plankton decoy distracts Mr. Krabs by crying outside the restaurant so Mr. Krabs can gloat about his victory. Plankton steals the formula, leaving a fake in its place. However, just as he is about to escape, SpongeBob catches him. They have a tug of war over the formula, but it magically vanishes before either can claim it.

Without the secret formula, SpongeBob can’t make more Krabby Patties, and the customers become ravenous. Only SpongeBob believes that Plankton is innocent of stealing the formula, and when all of Bikini Bottom turns on them, SpongeBob rescues Plankton with a giant soap bubble that he and Plankton fly away in. Bikini Bottom is soon reduced to a post-apocalyptic wasteland because of the absence of the cherished and much-relied-on Krabby Patty. SpongeBob proposes he and Plankton team up to get the formula back; he attempts to show Plankton the meaning of teamwork, but he doesn’t quite understand. Eventually, the duo decides to go to the Chum Bucket and rescue Karen, Plankton’s computer wife, to use as a power source for a time machine that will take them to the moment before the formula disappeared. They assemble the machine at an abandoned taco restaurant, but accidentally travel far into the future, where they meet Bubbles, a magical dolphin whose job it is to oversee the cosmos. They eventually succeed in retrieving the formula, but it turns out to be the fake Plankton had left.

Burger-Beard, whose seagull minions removed the final page of the book and rewritten the story so that he gets the formula, converts his ship into a food truck to sell Krabby Patties at a beach community named Salty Shoals. The final page, which has been discarded in the ocean, lands on the treedome of Sandy Cheeks, SpongeBob’s friend and a squirrel living underwater. Crazed by the lack of Krabby Patties, Sandy thinks the page is a sign from the „sandwich gods”, and suggests a sacrifice be made to appease them. The town attempts to sacrifice SpongeBob, but he and Mr Krabs smell Krabby Patties, and the crowd follows the scent, which leads to the surface. Bubbles returns because SpongeBob, who’d neglected to keep Saturn and Jupiter from colliding, cost him his job as overseer of the universe. However, he hated the job and is glad to be out of it, and thanks SpongeBob by allowing him, Patrick, Mr. Krabs and Squidward the ability to breathe on land. Plankton joins also, stowed away in SpongeBob’s sock. Bubbles shoots them out of his blowhole and they land on a beach.

The team locates Burger-Beard who, using the book, banishes them to Pelican Island. Using Squidward’s ink and the final page, SpongeBob transforms himself and the others into superheroes with special powers – The Invincibubble (SpongeBob), Mr. Superawesomeness (Patrick), Sour Note (Squidward), The Rodent (Sandy), and Sir Pinch-a-Lot (Mr. Krabs). They return and encounter Burger-Beard, who drives off with the formula, forcing the team to give chase. During the ensuing battle, the book gets destroyed. The team attempts to apprehend Burger-Beard, who picks the team off one by one.

Plankton, who’d been left on Pelican Island, becomes a muscle-bound hero named Plank-Ton and comes to assist them. After retrieving the formula, Plank-Ton and Invincibubble work together to create one final attack that sends Burger-Beard all the way to Bikini Atoll. Plankton, having learned the values of teamwork, returns the secret formula to Mr. Krabs and the gang uses the final page’s magic to return home to Bikini Bottom. With Krabby Patties back, Bikini Bottom returns to order, and Plankton re-assumes his role as business rival, bringing things back to the „status quo” ending the movie.

« The Road To Wellville / Droga do Wellville
Chappie »