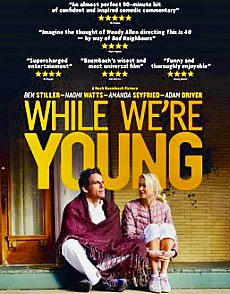 PLOT: Middle-aged couple Josh (Ben Stiller) and Cornelia Schrebnick (Naomi Watts) have a shaky relationship while living in New York City. Josh is struggling on the post-production of his documentary film about leftist intellectual Ira Mandelstam (Peter Yarrow). His previous documentary about military-industrial complex titled The Power Elite was based on C. Wright Mills’s sociological theory. Both Josh and Cornelia are struggling to try and have children, although Cornelia is reluctant due to her miscarrying the past two pregnancies. After finishing a lecture at the college he works at, Josh is approached by Jamie (Adam Driver) and Darby Massey (Amanda Seyfried), a young couple who invite him and Cornelia out to dinner, the former claiming to be a fan of both his works and the works of his accomplished documentary filmmaker father-in-law, Leslie Breitbart (Charles Grodin). Josh is immediately awestruck by Jamie and Darby’s non-conservative outlook on life, and he and Cornelia begin spending more time with them and indulging in their activities.

An aspiring filmmaker himself, Jamie talks with Josh about their projects, including Josh’s own documentary. This inspires Jamie to make a film about connecting with an old high school friend that he found on Facebook. Jamie and Darby decide to invite Josh and Cornelia to an ayahuasca ceremony, where a hallucinating Cornelia makes out with Jamie, while Jamie receives Josh’s approval in helping with the production of his film. Later, Cornelia agrees to help produce. Jamie and Josh manage to find the former’s friend, Kent Arlington (Brady Corbet), who is in the hospital for an attempted suicide. Not long after, Josh and Jamie discover that Kent was involved with a massacre during an Army tour in Afghanistan, creating an even bigger story for the focus of Jamie’s film.

While pitching his own film, Josh is dismayed when he cannot intrigue a hedge fund investor (Ryan Serhant) with the concept of his vague and confusing feature. Josh goes to Leslie with his film for a second opinion. When Leslie’s criticisms and suggestions are brought down by Josh, the two get into an argument over Josh and Cornelia’s inability to have children, as well as Josh calling himself a disappointment in the eyes of his father-in-law. Josh then attends a party for a screening of Jamie’s own film, which is met far more positively by Leslie and even the hedge fund investor. A jealous Josh argues with Cornelia over Jamie’s success, and they separate. Josh meets up with Darby, who is growing sick of Jamie’s increasingly self-centered attitude, and tells him about Cornelia kissing Jamie. Josh angrily confronts Cornelia the next morning and angrily denounces Jamie.

While teaming up with his editor on cutting his film, Josh comes across footage for Jamie’s film, finding evidence in it that suggests his meeting with Kent was all staged. Finding him, Kent reveals that he was really friends with Darby, not Jamie, and that he was contacted by Jamie weeks before their shoot. Capturing his confession on camera, Josh goes to Jamie and Darby to confront him, only to discover that a fed-up Darby is moving out and that Jamie is at a tribute celebrating Leslie at the Lincoln Center.

Josh confronts Jamie in private at the event, admonishing him for compromising the truth and genuineness of his story for dramatic purposes. When Josh forces Jamie to admit to it in front of Leslie, he excuses it, saying that it’s a good story regardless of the fabrication, which throws Josh into an outrage, but not before admitting that Leslie was right about changing his film. Outside, Josh and Cornelia reconcile.

One year later, Josh and Cornelia are driven to the airport to adopt a baby from Haiti. Josh finds an article in a magazine lauding Jamie as a filmmaking genius, which Cornelia and Josh pass off by admitting, „He’s not evil, he’s just young.” They then watch a very young child at the gate playing with an iPhone, staring at him with uncertainty.