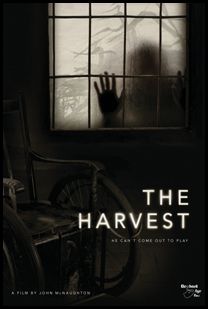 PLOT: Reeling from the loss of her mother and father, the teenage Maryann (Natasha Calis) moves in with her grandparents and is grateful when she manages to befriend Andy (Charlie Tahan), a wheelchair bound boy. As Andy is very sick he must stay within his home per the instructions of his mother, Katherine (Samantha Morton), who also forbids him from having any visitors. When their visits are discovered, Andy’s father, Richard (Michael Shannon), is initially fine with the visits but Katherine is having none of it and her behavior grows increasingly erratic.

After Katherine meets up with Maryann’s grandparents, and reveals to them that Andy is dying, they prohibit her from visiting Andy again. However, Maryann’s visits continue in Katherine’s absence, even taking Andy out of the house to play baseball. Their time together is cut short when Katherine calls her son to inform him she’s on her way home. They manage to get back inside the house and Maryann hides in the basement, where she discovers a comatose boy. After Katherine discovers that Maryann visited her son, she verbally and physically assaults him. Richard comforts Andy, while Katherine takes care of Jason, the comatose boy. With Richard gone to get medical supplies, it is revealed he is having an affair. Katherine’s behavior grows even more volatile, while Maryann discovers that Jason was abducted from the hospital as a baby. She sneaks back to Andy’s house and discovers that a heart transplant will take place. Katherine and Richard operate on Andy, removing a part from his liver. Richard later tells Andy that he had to have emergency surgery due to his appendix.

Meanwhile, Maryann returns back to the house and informs Andy about the boy in the basement, and her suspicions that he was kidnapped. Andy, still skeptical, sneaks down to the basement and sees Jason. Richard spots him and tries to get him out before Katherine returns, however they are unsuccessful. Katherine reveals that Jason is her son. Maryann returns to the house again to get Andy out, and Andy reveals to her that he is the real Jason, and that Jason is the real Andy. It is disclosed that the heart transplant is for the real Andy; Katherine and Richard’s biological son. The pair had abducted the real Jason as a baby, so they can harvest his organs, and save their son. Maryann tries to help „Andy” escape, while Richard goes to retrieve him for surgery. Feeling remorseful for what „Andy” had to endure, Richard helps him escape with Maryann. A frantic Katherine, refusing to accept that there is no hope for her son, subdues Richard with an injection and gives chase to „Andy” and Maryann. A dazed Richard heads down to the basement, and after unplugging his son’s ventilator, sets the basement on fire and lays next to his son. Katherine, who had caught up to „Andy” and Maryann, is informed via her pager that her son’s ventilator has been unplugged, and runs back to the house. She frantically tries to get her deceased son out of the burning house, but is unsuccessful when the roof collapses on them. In the end, Maryann and „Andy”, who has regained mobility in his legs, are seen playing baseball.