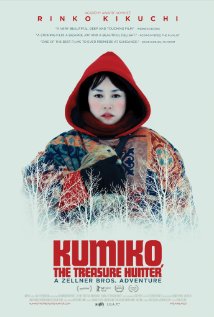 PLOT: In the city of Tokyo, Kumiko, a twenty-nine year old office lady, lives in utter solitude. She works a dreadful, dead-end job under a boss she hates, is intimidated by her well-off peers, and nagged by her overbearing mother to find a man and get married. The only joys in her life come from a grainy VHS tape of Fargo – an American film in which a man buries a satchel of money in the snowy Midwestern plains – and her pet rabbit, Bunzo. Kumiko is convinced that this treasure is real, and obsesses over its discovery, taking notes while watching the worn-out tape and even stealing a map from the page of a library book.

With the threat of a young hire usurping her position at work and increasing pressure from her mother to return home, Kumiko abandons Bunzo on a train and boards a plane to Minnesota using her boss’s company card. With a hand-stitched treasure map and a quixotic spirit, Kumiko embarks on a journey over the Pacific and through the frozen Minnesota wilderness to find the purported fortune. Once there, she quickly finds herself unprepared for the harsh winter, having a weak grasp of english, and, with the card cancelled, lacking funds. She is picked up by an old lady, but sneaks off when the lady tries to convince her to stay at her home. A police officer picks her up after passerby see her wandering and tries to help her. She shows him the film and he attempts to understand her, gaining her trust. While buying her winter attire, Kumiko tries to kiss the officer, but he tries again to explain to her that the treasure isn’t real, causing her to run away in a taxi. The deaf driver takes her most of the way towards Fargo, but she runs out of the taxi without paying the fare. She walks in the woods for a long time, imagining the treasure in some ice and eventually falls asleep in the snow. After taking a ski lift and walking for some time, Kumiko sees the marker indicating the location of the treasure and finds the satchel. Reunited with Bunzo, she wanders off into the distance.