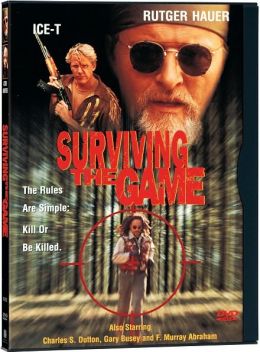 PLOT: Jack Mason is a homeless man from Seattle who loses his only friends–a fellow homeless man and his pet dog–on the same day. Dejected, Mason attempts to commit suicide when a soup kitchen worker, Walter Cole, saves him. Cole refers the man to businessman Thomas Burns, who kindly offers Mason a job as a hunting guide. Despite his misgivings, the lure of a well paying job causes Mason to accept.

Flying to a remote cabin surrounded by hundreds of acres of woods, Mason meets the rest of the hunting party, all of whom paid $50,000 for the privilege of being there. The party includes Doc Hawkins, the founder of the hunt, a psychotic psychiatrist who specializes in psychological assessments, Cole, John Griffin a Texas „oil man”, a wealthy executive named Derek Wolfe, Sr., and his son, Derek Wolfe, Jr., who is at first unaware of the true purposes of the hunt. The first night all the men are eating a nice dinner and engaging in conversation. Mason receives a pack of cigarettes from Hawkins and learns a little history about the man. Hawkins relays a brutal story from his childhood when his father forced him to train and then fight his dog as a lesson in being a man.

The following morning Mason is awakened with a gun in his face by Cole, who explains that the men are not hunting any animals, but rather Mason himself. Mason is given a head start with only the time it takes the others to eat breakfast. Mason quickly flees the area, but comes to a realization and turns back. The hunters finish their meal and set off after him. Wolfe, Jr., is horrified at the thought of killing a man, but is pushed into it by his father. The hunters race off into the forest, but by now Mason has returned to the cabin in search of weapons. He finds none, and instead makes the disgusting discovery of the hunters trophy room behind a locked door: the preserved heads of the victims of previous hunts.

Mason decides to burn it down using chemicals found in the room. The hunters quickly assume Mason’s return to the cabin and go back. Wolfe Sr. enters just as Mason lights up the cabin and engages in a fist fight with Hawkins out back, away from the others. Hawkins is knocked back into the cabin as the preserving agent explodes, killing him in a fiery inferno. Wolfe Jr. saves his father, and spots Mason fleeing in the process. The hunt resumes and Mason begins to use his wits to beat the hunters, luring them with falsely-planted lit cigarettes to lead them in the wrong way. Mason manages to lure Griffin away from the others, and takes him hostage.

Over the night, Mason learns why Griffin is taking part in the hunt. Years earlier his daughter was murdered by a homeless man and he’s venting his rage. Mason, in turn, relays his own tragic tale of losing his family in an apartment fire. This leads Griffin to have a change of heart in the morning. Upon rescuing him, Griffin reveals his decision to not continue the hunting, but is murdered by Cole to prevent any future legal conflicts. By now, with their numbers dwindling, the older hunters seem more intent on killing Mason. At one point, Mason sabotages one of their ATVs, causing it to explode, critically wounding Cole. Burns then chokes Cole to spare him from the pain. As they pursue Mason, Wolfe Jr. is killed by accident when he falls in a ravine, and Wolfe Sr. vows revenge.

The second night sees Wolfe Sr. and Mason fighting one on one with Mason the victor and Burns escaping to the city knowing that Mason will most likely be searching for him. Days later, Burns is back in Seattle, Washington, preparing to leave his current identity, hoping to escape both Mason and the legal responsibilities resulting from the disastrous hunt. But Mason has escaped the forest, returned to the city and tracked him down. A quick fight ensues, but Mason chooses not to kill him. Instead he walks away, but Burns attempts to shoot Mason in the back. Taking to heart a lesson he learned from his old friend Hank, Mason had blocked the barrel of Burns’s gun and it backfires on the man, killing him as Mason walks out into the dark.