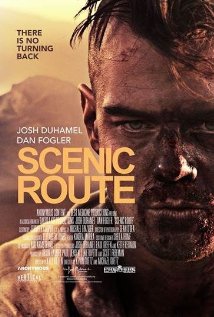 PLOT: Mitchell and Carter, old friends who have begun to drift apart, agree to go on a road-trip. Along the way, their truck breaks down in the California desert. Mitchell is relieved when a motorist stops and offers help, but Carter admits he has sabotaged their truck in order to give them time to reconnect and force a dialogue between them. Carter, who has remained idealistic and continued with an unsuccessful writing career, believes that Mitchel has sold out, and Mitchell, who gave up his rock band for a corporate job, believes that Carter remains stuck in adolescent rebellion. They dismiss the helpful motorist after Carter replaces the part he removed from the engine. However, after switching off the engine, the truck refuses to start, and tensions continue to rise as the former friends argue and blame each other. In a moment of reconciliation, Carter helps Mitchell to realize one of his dreams and gives him a crude Mohawk haircut. The two later come to blows over an argument, and Mitchell believes that he has accidentally killed Carter. As a stricken Mitchell drags Carter’s body to a shallow grave, Carter wakes up in a daze and freaks out.

Thinking that Mitchell was going to bury him alive, Carter flees from their impromptu camp, despite Mitchell’s protestations. Carter later returns during the freezing cold night, and they settle into a truce. Starving and ill-prepared for the desert’s temperature extremes, the two decide to give up on waiting for help, and they attempt to cross through the desert on foot. As they pass through an abandoned town, Mitchell’s cell phone starts ringing. They excitedly answer the call and are soon rescued. In a rapid montage, Mitchell goes back to his roots as a rock musician, Carter moves into a guest house provided by Mitchell and his wife, Carter and Mitchell’s wife come to respect each other, and Carter and Mitchell each experience professional success and personal growth. However, Mitchell calls Carter to voice his suspicions of their too-perfect dénouement, and suggests that it is a shared delusion experienced by the pair as they die in the desert, Carter denies this possibility. The final scene of the film shows Mitchell lying in bed, with images from the desert while a faint cellphone sound is ringing.