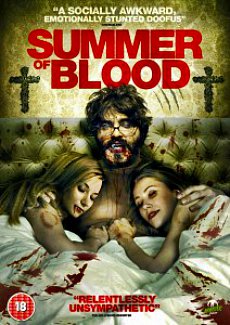 PLOT:  During an evening date, Eric Sparrow (Onur Tukel) crassly refuses a marriage proposal by his long suffering girlfriend Jody (Anna Margaret Hollyman). On the tense walk home, they run into Jody’s college flame Jason (Jason Selvig), for whom Jody promptly ditches Eric. Now alone, Eric stumbles upon a man bleeding of a neck wound in an alley. Despite the man’s pleas for help, Eric tactlessly jokes through the encounter until the man bleeds to death.

At work, Eric relentlessly pursues his uninterested coworker Penelope (Dakota Goldhor), all while continuously slacking at a job. After several failed attempts to reconnect with Jody, he goes on a series of three disastrous dates with Samantha (Vanna Pilgrim), Blake (Melodie Sisk), and Denise (Juliette Fairley).

While walking alone late one night, Eric is approached by a curious stranger named Gavin (Dustin Guy Defa). After forcing Eric to admit that he really wants to die, Gavin, revealed to be a vampire, bites Eric in the neck. The next day, Eric is found sleeping at his work in a shirt still stained in blood. He is promptly fired, having missed an important meeting earlier that morning.

That evening, Eric begins to suffer from strange pains and finds that he can no longer enjoy the taste of food or smoking cigarettes. In a graceless encounter, Eric bites and kills his first victim (Keith Poulson). Eric later reattempts dating Samantha, Blake, and Denise, sequentially seducing and transforming all three into vampires. Using his new powers of hypnosis, he also convinces his landlord Mr. Leiberman (Jerry Raik) to stop charging him rent. Eric again tries reconnecting with Jody, only to be punched in the face by Jason before biting his ankle in retaliation. Eric later runs into Gavin while attacking another victim, and the two exchange their views on God and the new reality they face as vampires.

Later, Jody surprisingly shows up at Eric’s apartment to reconnect and the two share an intimate moment. Six months later, Eric and Jody are on their wedding night when Eric suddenly needs to feed. Jody asks Eric to bite her, but he refuses and goes out looking for blood. He runs into Penelope on the street and ends up turning her into a vampire instead. Eric arrives back at the hotel, but it turns out that Penelope followed him back. Eric and Jody proceed to argue about his fear of commitment, until Eric impulsively bites Jody. As Eric feeds, Penelope joins him and the two end up drinking too much of Jody’s blood.

As Jody lies dying on the bed of the honeymoon suite, Eric and Penelope discuss the possibility of God. The two of them eventually engage in a disorderly prayer for Jody to improve and for all three of them to be normal people again. Just as they conclude, Jody, now a vampire herself, suddenly rises and demands the three of them make love.