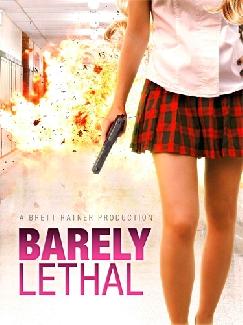 PLOT: The girls of Prescott Academy are taught practically since birth how to become trained assassins. Their number one rule is „no attachments”. Number 83 (Hailee Steinfeld) has always had curiosity of the world outside the Academy, however. Despite her excellent work in the field, she has dreamt of a normal life. Her mentor Hardman (Samuel L. Jackson) has always discouraged her and the other girls from becoming attached to anything. 83’s skills have also made her rivals with 84 (Sophie Turner). Hardman assigns the girls to capture wanted arms dealer Victoria Knox (Jessica Alba). The agents head to Chechnya to apprehend her. 83 goes undercover as one of those captured and brought before Knox. She manages to latch herself and Knox onto an oncoming jet with Hardman on it. When they get high and far enough, 83 drops herself into a river while the other agents apprehend Knox. They find no sign of 83 and declare her MIA.

83 goes into hiding to start her new life as a regular teenager. She brushes up on her teen culture through popular magazines and watching movies like „Mean Girls” and „Bring It On”, then enrolls in a high school and goes through an exchange program to live with the Larson family under the name Megan Walsh. She is picked up by Mrs. Larson (Rachael Harris) and her children Liz (Dove Cameron) and Parker (Jason Ian Drucker). Parker already likes Megan but Liz is cold and distant.

Megan picks a ridiculous outfit for her first day of school and is immediately laughed at. Liz gets embarrassed and gives her new clothes to put on. Megan gets introduced to the students at an assembly where she says she is from Regina, Canada, but she pronounces it to rhyme with „vagina”. The students laugh at her, but she is saved by the school’s most popular guy, Cash (Toby Sebastian), as he goes up to play his guitar and sing. He then performs onstage with his band, Emotacon.

As Megan continues her new life as a high school student, she makes friends with a geeky kid named Roger (Thomas Mann), who has an interest in her, despite her attraction to Cash. Megan finds out she’s in a biology class with him and hacks the system to make him her lab partner, to the ire of two mean girls. As retaliation, the girls convince Megan that Cash loves girls with school spirit and suggest she try out for the position of school mascot. Using her combat skills in her tryout, Megan scores the position. During a game, a few kids from a rival school come and try to kidnap Megan as part of an annual tradition. She kicks their asses and the video of her doing this goes viral. It earns her some popularity, but also annoys Liz.

Back at Prescott, Hardman is holding Knox in captivity. 84 walks in on them as Knox tells Hardman that Prescott destroys lives, and she’s not just talking about the targets.

Megan spends more time with Cash, to Roger’s dismay. As she’s walking home, she is apprehended by a Prescott analyst (Jaime King) and is brought back to Hardman. He is ready to have his minion Pedro (Steve-O) torture Megan under the assumption that she is working with enemies of Prescott. He injects her with a truth serum and realizes she is honest when she says she only wanted to enjoy a normal life outside the Academy. Pedro also sympathizes with Megan as she cries. Hardman lets her go but warns her that if she gets into trouble, they won’t be there to bail her out. They dump her on the front porch of the Larson house to make Megan look like she’s super drunk.

Megan gets invited to a big party at the home of the school’s class clown Gooch (Gabriel Basso). Mrs. Larson encourages Megan to go and makes Liz join her. At the party, Megan continues to hang out with Cash, while Liz gets drunk with Gooch in his bathtub, learning that his name is really Bernard and that he’s not a total jerk. To Megan’s surprise, 84 is there, now going by Heather. Megan thinks Hardman sent Heather to shadow her, but she has her own plan brewing. She goes after cash to piss Megan off, forcing them into a game. Megan eventually wins Cash’s attention and gets asked by him to the homecoming dance.

The next morning, Mrs. Larson is upset with Megan and Liz since Liz passed out and got a dick drawn on her face. Megan is later about to take the bus to school when she sees that Hardman is driving a bus and only passes through to warn Megan that Knox has escaped from Prescott. Liz drives Megan to school, but they are pursued by a masked assassin. Megan steers them away from danger and admits to Liz her secret. They crash in a junkyard while also getting the assassin to crash. Megan goes to investigate and smells what she recognizes to be Ke$ha perfume, meaning it was Heather that tried to murder them.

Liz is in the hospital after the crash. Megan tells her she has to leave before anybody else gets hurt. Liz responds that Megan trying to abandon the family would be worse.

The girls go to the homecoming dance. Megan realizes that Cash is kind of a boring person and dumps him. She goes to apologize to Roger, who is still sort of upset with her, and then she finds out that his date is Heather. She provokes Megan’s rage and they fight in the gym. They spill punch on the mean girls, who then start to fight each other. Heather chases Megan into the hallway where they end up in the kitchen. Heather says she joined Knox for the chance to kill Megan herself. She also brags about making out with Cash AND Roger. Liz sneaks up on Heather and stabs her in the leg with a corn dog stick, allowing Megan to whack Heather over the head and knock her out.

Megan returns home to find that Knox and some goons have taken Parker and Mrs. Larson hostage. Megan fights the goons but Liz gets captured as well. Knox reveals that she was the very first Prescott girl, but she left and turned against them for robbing her of her life. Hardman shows up with reinforcements to take out the goons and tranquilize Knox. Megan knows Hardman came back to help her, despite his denial, and she hugs him. Parker asks Hardman how he can get in on the action, and he tells him to apply for the Prescott boys school. He excitedly asks his mom if he can. In a mid-credits scene, Heather is in a car with a former minion of Knox. She stares at a photo of Megan on a screen and orders him to find out where she is going to college and/or safety schools.