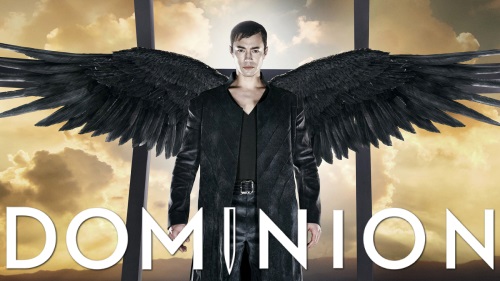 PLOT: Dominion season 2 continues the story of the dangerous journey of the rebellious soldier named Alex Lannen, who unexpectedly found that he’s the savior of mankind. Angels hated people for centuries. But the angel Michael took the side of the people in this battle. Last season heaven raised hell on earth. This season hell’s breaking loose. Belief in God doesn’t help, and humanity need rely only on themselves. Many will be sacrificed, and all will be judged. Mankind lost the battle, but the war has just begun. How far people are willing to go to survive? If you want to kill an angel – you need to think like an angel…

Season 2 comes to a finish as the 8-Ball Army breaches the walls of Vega; at the same time, David makes one final sacrifice to secure his survival. Meanwhile, Gabriel forces Michael back to Mallory; Noma’s dark secret is revealed; Claire is desperate for closure; and Alex fights for control of the only home he has left.

Michael engages in a fight to the death with Gabriel as Vega smolders from the havoc of the Amphora; at the same time, William makes a decision that seals the city’s fate.Meanwhile, Noma’s mysterious past is explored; Arika contemplates her escape; and Claire joins the frontlines to protect her city.

The Darkness overtakes Vega’s citizens as they begin to live out their greatest fears. Meanwhile, William wrestles with the truth behind his time in the desert; David faces the harsh reality of what it is to be king; Arika becomes the victim of her own manipulations; and Alex feverishly searches for the Amphora in hopes a putting a stop to the madness.

Michael gambles with his life as he faces the repercussions of his time in Mallory; Alex and Gates spearhead a mission to save Vega from destroying itself; at the same time, Gabriel prepares to unleash an unspeakable evil on the city; and David makes amends with his past.

Alex, Noma and Michael hit an unexpected roadblock in their trek home; Claire makes a judgment call that threatens the security of a war-torn Vega; Julian changes tactics in an attempt to break Gabriel; Arika and Gates wrestle with the cost of survival.

“The Longest Mile Home” Alex, Noma and Michael near Vega; at the same time, Julian presses Riesen for the location of the amphora by dredging up his past. Meanwhile, a military standoff ends in disaster, forcing Claire to make a harrowing decision; and an unexpected face wanders the city streets claiming to be the Chosen One.

Alex finds unexpected shelter to nurse a wounded Noma, with the New Delphi army hot on their trail; at the same time, Michael and Gabriel attempt to escape their mutual captivity while revisiting a past that haunts them both; and Claire calls for a dangerous parlay as David puts a plan in motion to secure his legacy in Vega.

“Reap of the Whirlwind”

Alex attempts a dangerous eviction in an effort to save Vega from an impending attack; at the same time, Michael plots their escape from New Delphi; and Claire desperately navigates the fallout of Civil War as Gates travels behind enemy lines to kill a broadcast that threatens peace in the city. Elsewhere, David procures his role in the rebellion following correspondence with an unexpected ally.

“Son of the Fallen”

Alex spearheads a plan to intercept Michael and Gabriel, who have breached the walls of New Delphi in pursuit of their mutual target; Claire begins the negotiation process with the revolting V1s; at the same time, David attempts to restore his legacy by any means necessary.

Alex, knowing his welcome in New Delphi is running thin, takes a dangerous step in his hunt for Gabriel; at the same time, he, Noma and Riesen uncover the truth behind Julian’s origin. Elsewhere, Claire and Gates go toe-to-toe with a dangerous assassin; and David attempts to forge an alliance with the revolting V1s.

Alex embarks on a dangerous quest to prove himself to his new ally, during which a startling face from his past appears; at the same time, Claire enlists the help of an old friend to halt what she believes is a brewing revolt from the V1s; and Michael makes a sacrifice that will prevent him from ever being with his love.

Alex and Norma make their way to New Delphi following an attack. Claire starts to understand her responsibilities.

Mouth of the Damned

Alex and Noma look for an ally with Gabriel on their trail. Claire makes friends with her assassin.