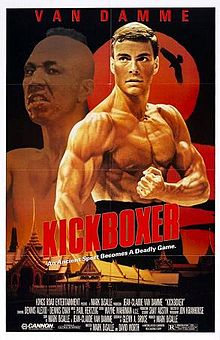 PLOT: Kurt Sloane (Jean-Claude Van Damme) is the cornerman for his brother Eric (Dennis Alexio), an American kickboxing champion. Kurt and Eric travel to Bangkok to challenge Tong Po (Michel Qissi), Thailand’s undefeated champion. After a brutal first round, Kurt realizes that they are outmatched by Tong Po and tries to convince his brother to stop the fight. Unwilling to give up, Eric returns for the second round and continues to take a vicious beating, finally prompting Kurt to throw in the towel. Tong Po ignores him and continues the assault, which ultimately leaves Eric paralyzed from the waist down. Eric is then carried outside and left on the street without any help, until Winston Taylor (Haskell Anderson), a retired American special forces member, intervenes and agrees to take the brothers to the hospital. After several hours of surgery, the doctor informs Kurt that Eric will never walk again.

Furious, Kurt vows to avenge his brother but is warned by Taylor that the only way to fight Tong Po is in the ring, as going after him outside the ring will result in reprisals against Americans by Thailand citizens because Tong Po is a national hero. Though reluctant at first, Taylor eventually tells him about Xian Chow (Dennis Chan), a locally famous trainer living in a remote area of Thailand. Upon locating Xian, Kurt is able to convince him to train him in the art of Muay Thai („Thai boxing”). Xian trains Kurt using many primitive methods and focusing on speed, agility, and the ability to protect himself through balance and timely breathing. While training, Kurt attempts to foil the operations of a group of Thai mobsters led by Freddy Li, who continuously steal money from the store of Xian’s niece, Mylee (Rochelle Ashana)and threaten her. After Kurt makes short work of the thugs in a bar fight with Freddy Li looking on, Xian is able to convince Freddy Li arrange a match between Kurt and Tong Po. It is determined that they will fight in the „ancient way”, in which both fighters wrap their hands in hemp rope, which is then coated in resin and dipped in broken glass to make them deadly weapons.

Freddy Li arranges to have the fight fixed, and borrows $1 million from the crime syndicate’s boss to bet on Tong Po. In the days leading up to the match, Mylee is beaten and raped by Tong Po while Eric is kidnapped by Freddy Li’s henchmen for the purpose of blackmailing Kurt into losing the fight. To save his brother’s life, Kurt is instructed by Freddy Li to go the distance with Tong Po before losing the match. He endures a torturous beating, but fortunately, Xian and Taylor are able to locate and rescue Eric before the fight concludes. With his brother free from danger, Kurt manages to find a second wind and defeat Tong Po in a vicious fashion. For good measure, he also kicks Freddy Li.
GATUNEK: Akcja, Sportowy, Thriller