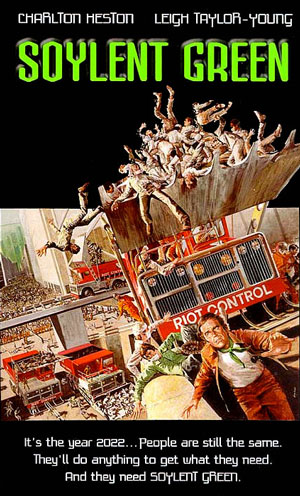 PLOT: The 20th century’s industrialization has left the world permanently overcrowded, polluted and stagnant by the turn of the 21st century. In 2022, with 40 million people in New York City alone, housing is dilapidated and overcrowded; homeless people fill the streets; about half are unemployed, the few „lucky” ones with jobs are only barely scraping by themselves, and food and working technology is scarce. Most of the population survives on rations produced by the Soylent Corporation, whose newest product is Soylent Green, a green wafer advertised to contain „high-energy plankton” from the world’s oceans, more nutritious and palatable than its predecessors „Red” and „Yellow”, but in short supply.

New York City Police Department detective Frank Thorn (Charlton Heston) lives with his aged friend Solomon „Sol” Roth (Edward G. Robinson). Due to Roth’s advanced age, he remembers life before its current miserable state, and he routinely waxes nostalgic for his youth when the air was clean and the weather was not perpetually summer. He was also well educated and has a small library of reference materials which he uses to help Det. Thorn solve crimes (consequently Roth is referred to as a police „book”). While investigating the murder of William R. Simonson (Joseph Cotten), obviously a member of the wealthy elite, Thorn questions Shirl (Leigh Taylor-Young), a concubine (referred to as „furniture”), and Tab Fielding (Chuck Connors), Simonson’s bodyguard, who, when the murder took place, was escorting Shirl to a store selling meat „under the counter” for Simonson. Thorn searches Simonson’s apartment for clues and enjoys Simonson’s luxurious lifestyle like air conditioning and hot running water, and he helps himself to Simonson’s real bourbon, fresh vegetables, and a flank steak that Shirl had purchased earlier as a special surprise for Simonson.

Thorn later gives Roth the classified Soylent Oceanographic Survey Report, 2015 to 2019 found in Simonson’s apartment. Roth’s research reveals that Simonson and the current state governor of New York, Joseph Santini (Whit Bissell), were partners in a well-known high-powered law firm, and that Simonson was also a member of the Board of Soylent.

At the police station, Thorn tells his lieutenant, Hatcher (Brock Peters), that he suspects an assassination: nothing was stolen from the apartment, its sophisticated alarm was not working for the first time in two years, and Simonson’s bodyguard was conveniently absent. Continuing his investigation, Thorn visits Fielding’s apartment and questions Fielding’s concubine, Martha (Paula Kelly), helping himself to a teaspoon of strawberry jam, later identified by Roth as too great a luxury for the concubine of a bodyguard to afford.

Under questioning, Shirl reveals that Simonson became troubled in the days before his death. Thorn questions a Catholic priest that Simonson had visited, but the priest at first fails to remember Simonson and is later unable to describe the confession. Fielding later murders the priest to silence him.

Meanwhile, Governor Santini orders the investigation closed, but Thorn disobeys and the Soylent Corporation dispatches Simonson’s murderer to kill Thorn. He tracks Thorn to a ration distribution center where police officers are providing security. When the Soylent Green there is exhausted, the crowd riots. The assassin tries to kill Thorn in the confusion, but is crushed by a „scoop” crowd-dispersion vehicle. Thorn then threatens both Fielding and Martha to scare Fielding out of following him and returns to Shirl, telling her that all cities are like theirs and the more valuable, unharmed countryside is guarded to protect the wealthier classes’ privileges of better food, water and shelter, leaving the majority of people trapped in the cities with no escape.

Roth takes Soylent’s oceanographic reports to a like-minded group of researchers known as the Exchange, who agree that the oceans no longer produce the plankton from which Soylent Green is reputedly made, and infer that it must be made from human remains, as this is the only conceivable supply of protein that matches the known production. Unable to live with this discovery, Roth seeks assisted suicide at a government clinic called „Home.”

Thorn rushes to stop him, but arrives too late, and is mesmerized by the euthanasia process’s visual and musical montage – a display of forests, wild animals, rivers, and ocean life, now extinct. Under the influence of a lethal drug, Roth tells Thorn his discovery and begs him to expose the truth. To this end, Thorn stows himself aboard a garbage truck to the disposal center, where he sees human corpses converted into Soylent Green. Returning to make his report, he is ambushed by Fielding and others.

He phones his precinct for backup but the precinct is engaged on a priority call. Thorn asks to be connected with Shirl, and to be „cut in” when the precinct is free. Thorn tells Shirl to stay with her apartment’s new owner, and Shirl tells Thorn she wants to live with him, but the line is „cut in” and Thorn is connected to Hatcher. Thorn retreats into a cathedral filled with homeless people. In the ensuing fight, he kills Fielding but is seriously injured. When the police arrive, Thorn urges Hatcher to spread the word that „Soylent Green is people!”

« Of Monks and Masters: The Yecha Clan
Monk Comes Down the Mountain »