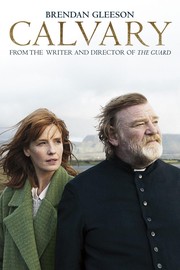 PLOT: In a confessional, a parishioner talks to Father James about his horrific childhood sexual abuse by a priest. He says he will kill James at the beach the next Sunday, because James is a good man and it would be worse and more disconcerting for the Catholic Church than killing a bad priest; in any case, the offender has already died.

James’ daughter Fiona comes to visit from London after a failed attempt at suicide. She’d felt abandoned by her mother and James: the mother died, then James became a priest. Fiona and James know they love each other, and try to repair their relationship.

James hears that local butcher Jack Brennan has hit his wife Veronica, who’s having an affair, and James confronts Jack. Jack denies having hit her, and blames Veronica’s Ivorianlover, Simon.

James then visits several people, including an elderly American writer, and a policeman from whom he obtains a gun. He is also visited at the church by a socially awkward young man, Milo, who is trying to decide between committing suicide or joining the army, as he feels a lot of rage and anger that he hasn’t yet had sex. Milo and James discuss whether killing, and learning to kill, are immoral, as James attempts to talk Milo out of both joining the army and committing suicide.

A lonely and unpleasant millionaire, Michael Fitzgerald, asks James to visit him in his large house outside of town. He tells James that most of his money is illegal and he wants to donate some of it to the church; however, James does not believe that Fitzgerald actually feels guilt. Before James leaves, Michael drunkenly urinates on the painting The Ambassadors, to show his contempt for his wealth, and since he made pursuit of wealth his life’s purpose, his contempt for himself.

James is then called to the hospital where he is asked to perform the last rites for a Frenchman who was critically wounded in a car accident. After performing the rites, James comforts the wife of the dead man, and the two pray together. On his way out, James is teased by the atheist doctor Frank Harte, who has an extremely blase view towards death.

James also visits a convict, Freddie Joyce, who, it is suggested, killed several women and ate them; James tries to persuade him to tell him the location of an (uneaten) body buried in the woods but Freddie cannot remember. Although he asks for forgiveness, James accuses him of not truly feeling guilt.

Later at the pub, James sees Veronica and Harte doing cocaine but doesn’t admonish them. While in the pub, the townsfolk see the local church burning down. However, when they go outside many of them do not seem especially concerned. Later, Michael donates money to assuage his conscience.

While walking with his daughter, James tells her he loves her. Later that night, James finds that his dog has had his throat cut. Crying over this loss, he buries his dog in the back garden. The next day, his daughter leaves. While walking in the countryside afterwards, James strikes up conversation with a young girl. However, when her father sees them he orders his daughter to get in the car and yells at James, believing him to be a pedophile.

At the pub, James talks to Frank Harte, the atheist doctor, who relates how a 3-year-old child was made permanently deaf, mute, paralyzed and blind after botched anesthesia; Harte seems to take pleasure in the pain of the situation. James is offended and angered by Harte’s story and almost attacks him. When Harte has left James has several more drinks. At closing time, James refuses to leave and when pressured by the barman draws a gun on him. The barman does not believe he will kill him, so James shoots several times at the bar and then, when out of ammunition, aims at the barman. In response, the barman draws out and wields a baseball bat.

A battered James returns home where he shouts angrily at his fellow priest, who is so offended he decides to leave. James decides to leave as well, packs a suitcase and goes to the airport. While there he meets the Frenchwoman he comforted earlier and they talk. Seeing the dead man’s coffin by the aircraft on the tarmac convinces James to return home.

On Sunday, James heads to the beach. On the way he meets his writer friend, who has just finished his book; James tells him he is a very good writer. He then calls Fiona, telling her that people look too much at sins and not enough on virtues. He believes that the most important virtue is forgiveness. Fiona agrees and they make their peace with each other.

At the beach, James waits, and briefly talks to Michael who admits to feeling detached from life. A surprised James comforts him and promises to come and visit him later. Michael leaves and James waits on the beach. It is then revealed to the audience that the would-be killer is Jack. (James already knew this; he had recognized Jack’s voice in the confessional.)

Jack confesses to burning down the church, and to hitting Veronica; however, he denies having killed James’s dog. Jack asks if James cried for the dog, and James says he did, and Jack then asks whether James cried for the children whom priests abused. When James admits he didn’t, that he felt simply detached from the whole matter, an angry Jack shoots James in the stomach. A young boy painting the beach runs toward them; Jack points his gun at the boy, and James tells the boy to run away. James tells Jack it is not too late to stop, but Jack says it is; he shoots James in the head, and walks away.

Later, Fiona visits Jack in prison. As Fiona and Jack, separated by a glass panel, pick up their intercom phones, the movie ends.

« Mara, Casey Affleck, Foster
Pójde za tobą w ciemność / I Will Follow You Into the Dark »