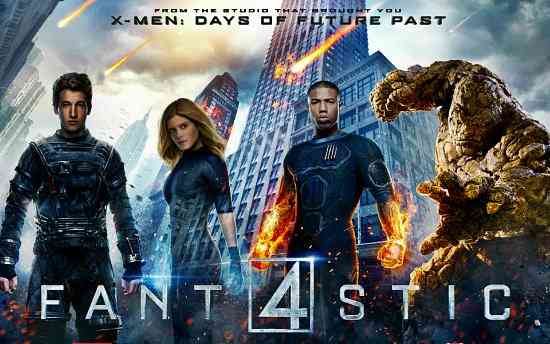 PLOT: Friends Reed Richards (Miles Teller) and Ben Grimm (Jamie Bell) have worked together on a prototype teleporter since their childhood, eventually attracting the attention of Professor Franklin Storm (Reg E. Cathey), director of the Baxter Foundation, a government-sponsored research institute for young prodigies. Reed is recruited to join them and aid Storm’s children, scientist Sue Storm (Kate Mara) and technician Johnny Storm (Michael B. Jordan), into completing a „Quantum Gate” designed by Storm’s wayward protégé, Victor von Doom (Toby Kebbell), who begrudgingly agrees to help due to his unrequited feelings for Sue.

The experiment is successful, and the facility’s supervisor, Dr. Allen (Tim Blake Nelson), assembles a group of astronauts to venture into a parallel dimension known as „Planet Zero”. Disappointed at being denied the chance to join the expedition, Reed, Johnny, and Victor recruit Ben to help them commandeer the Quantum Gate and embark on an unsanctioned voyage to Planet Zero, which they learn is a world filled with otherworldly substances. Victor attempts to collect a sample of the substances, causing the entire structure they’re in to collapse and the ground to erupt with green lava-like substance. Reed, Johnny, and Ben return to their shuttle just as Sue brings them back to Earth. Victor is left behind after he falls into the collapsing landscape. The machine explodes, altering Reed, Sue, Johnny, and Ben on a molecular-genetic level, affording them super-human conditions and abilities beyond their control. They are then placed in government custody and confinement to be studied and have their conditions and abilities tested. Blaming himself for the accident, Reed escapes the facility and becomes a fugitive while desperately trying to find a cure.

One year later, Reed is located in Central America by Sue and captured by Ben, who has become a military asset along with Johnny and Sue. Johnny and Sue have been outfitted with specialized suits, one of which Reed later receives, designed to keep up with their conditions and abilities and to help them stabilize, control, and contain their abilities. Reed is brought to Area 57, where Dr. Allen conscripts him to open another portal to Planet Zero in exchange for giving Reed the necessary resources to find a cure. Arriving in Planet Zero, Dr. Allen’s explorers find Victor, who has been fused to his spacesuit and can now control the elements, as well as having telekinetic abilities, and bring him back to Earth. Driven insane by the experience and believing the human race needs to be destroyed so he can rebuild Planet Zero in his image, Victor escapes, killing scientists and soldiers in the base including Dr. Allen and Professor Storm. Victor returns to Planet Zero using the Quantum Gate, with Ben, Johnny, Reed, and Sue in pursuit.

On Planet Zero, Victor activates a portal, using a structure he made while in the realm, that begins consuming the landscape of the Earth. He is confronted by the four and, after a destructive battle, Ben punches Victor into the portal’s energy beam, disintegrating him, while Johnny closes the portal. Returning to Earth, the group is rewarded for their heroics by being given a new base of operations by the United States military. They decide to use their powers to help people and adopt the mantle of the „Fantastic Four”.