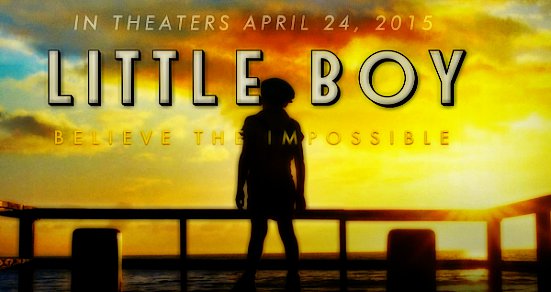 PLOT: The story centers on a 7-year-old boy, Pepper Flynt Busbee (Jakob Salvati), who is devastated when his father enlists in the army during World War II. The title is a reference to Little Boy, the code name for the atomic bomb dropped on Hiroshima as well as a reference to Pepper’s height. Pepper has an extremely close relationship with his loving father. It begins from the very moment he is born when his father cradles him in his arms and mentions how small he is. When Pepper is examined by a doctor the physician is asked if the child is a midget. However, the doctor says that the term is offensive and suggests that he is just a „little boy.” However, when World War II begins, Pepper’s older brother is declared ineligible for military service because of flat feet and his father joins in his place.  Not long after his father leaves for war, Pepper hears the Bible verse, „Truly I tell you, if you have faith as small as a mustard seed, you can say to this mountain, ‘Move from here to there,’ and it will move” (Mt. 17:20), he becomes determined to get enough faith to bring his father home. Nevertheless, as his friend and mentor Father Oliver tells him, faith is useless to anyone who harbors hatred. The film highlights the tremendous hatred against Japanese-Americans that was rampant in America at this time. Father Oliver tells Pepper to befriend a Japanese man named Hashimoto. At first, the racism Pepper has internalized from society makes him hesitant to follow this advice, but as he gets to know Hashimoto, he begins to value their friendship and learns from Hashimoto to stand up to those who bully him about his height. The plot then takes a turn when Pepper’s father is reported missing in action. Pepper’s mother (Emily Watson) struggles to keep her family together in the face of these overwhelming hardships.