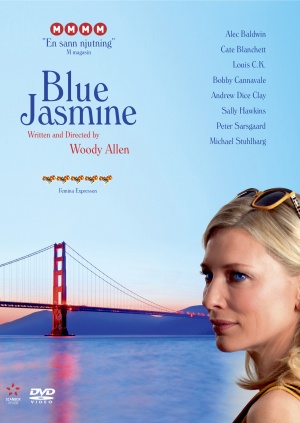 Summary: Jasmine (Cate Blanchett) disembarks in San Francisco after a flight from New York. The lady who had been sitting next to her on the flight tells her husband that Jasmine had been talking to her constantly, and that she had been buttonholed after mistakenly responding to Jasmine’s chatter. Jasmine takes a taxi to her sister Ginger’s (Sally Hawkins) apartment, where Ginger is shocked to learn that Jasmine travelled first class despite claiming to be completely broke.

Jasmine reflects on the rich yet trying life that she has lost and tries to start a new one, but is constantly drawn back into her expensive habits. In flashbacks, she remembers her past life in New York with her husband Hal (Alec Baldwin), a wealthy businessman.

Some years previously, Ginger and her working-class husband Augie (Andrew Dice Clay) visited New York, their first time there in many years. Jasmine gives them their car and driver for them to tour the city, and pays for their stay in a Marriott hotel in order to avoid spending any time with them. Ginger announces that they have won $200,000 in the lottery which Augie intends to use to start a construction business, but Jasmine offers Hal’s help in investing the money instead. While touring New York Ginger sees Hal kiss another woman. The woman later appears at Jasmine’s birthday party and it became clear to Ginger that Hal is cheating on Jasmine. Ginger debates on whether to say anything to Jasmine, but in the end decides to stay quiet, hoping to spare her sister’s marriage.

It is later revealed that Hal is a fraudster, and that he has lost the money Ginger and Augie had given him to invest. Ginger does not blame Jasmine, but Augie resents her and blames her for the loss of his one chance to have a business of his own. We also learn that Hal commits suicide after being sent to prison for fraud, Ginger has divorced Augie, and begun dating a mechanic called Chili (Bobby Cannavale).

Jasmine fancies the idea of becoming an interior designer. She needs to take an online class, but has no computer skills. Jasmine takes a job with a dentist, Dr. Flicker (Michael Stuhlbarg), who pesters her with unwanted sexual advances. He tries to force himself on her, but she fights him off and quits the job.

Jasmine’s life improves when she meets a wealthy widower, Dwight (Peter Sarsgaard), at a party. Dwight is a diplomat who aspires to become a congressman. Ginger, influenced by Jasmine’s snide remarks about Chili, has a romance with Al (Louis C.K.), whom she meets at the same party. Jasmine seems on a path to happiness with Dwight, who shares her tastes, though Jasmine lies to him about her past life, saying that her husband was a doctor who died of a heart attack.

After a whirlwind romance, Dwight is about to buy an engagement ring for Jasmine when Augie happens to see them on the street and rails at her about what Hal did to him. Augie also tells Jasmine that her estranged stepson, Danny (Alden Ehrenreich), is living and working nearby in Oakland. Dwight is upset that Jasmine lied to him and calls off their engagement. Jasmine asks to get out of the car and he leaves her by the side of the road, whereupon she walks all the way to Oakland to see Danny. Danny does not welcome the visit, telling her that he asked Augie not to reveal his location. He says that Jasmine is part of the past which he wants to leave behind, and that Augie told him „the whole story” and he never wants to see Jasmine again.

In a flashback we see when Jasmine finally learns of Hal’s many affairs throughout their marriage and confronts him. Hal wants to leave her for a teenage au pair and, in a moment of blind rage, she calls the FBI to inform them of Hal’s fraudulent business dealings. This action leads to Hal being arrested, imprisoned, and committing suicide. Danny cannot forgive Jasmine for having denounced Hal, even though he was extremely bitter at the revelation that the father he had been proud of turned out to be a crook.

Jasmine returns to her sister’s apartment and is put out by seeing Ginger back with Chili. Jasmine and Chili needle each other and she is furious that Ginger takes his side. Jasmine lies to Ginger and claims that she is going to marry Dwight, and moves out immediately.

The film ends with Jasmine seating herself on a park bench, talking to herself about her troubles, with a final yearning look for someone to help her.